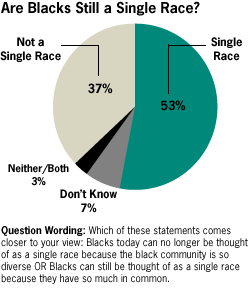 African Americans see a widening gulf between the values of middle class and poor blacks, and nearly four-in-ten say that because of the diversity within their community, blacks can no longer be thought of as a single race.

The new nationwide Pew Research Center survey also finds blacks less upbeat about the state of black progress now than at any time since 1983. Looking backward, just one-in-five blacks say things are better for blacks now than they were five years ago. Looking ahead, fewer than half of all blacks (44%) say they think life for blacks will get better in the future, down from the 57% who said so in a 1986 survey.

Whites have a different perspective. While they, too, have grown less sanguine about black progress, they are nearly twice as likely as blacks to see black gains in the past five years. Also, a majority of whites (56%) say life for blacks in this country will get better in the future.

Telephone interviews for this survey were conducted among a nationally representative sample of 3,086 adults from September 5-October 6, 2007. African Americans and Hispanics were over-sampled – a total of 1007 interviews were completed with blacks, and 388 with Hispanics.

Other key findings include: 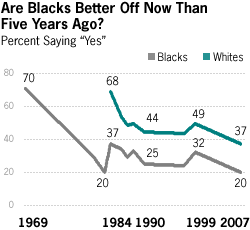 On Views of Race and Inequality, Blacks and Whites Are Worlds Apart

How blacks and whites view the state of race in America