Looking to the future, Americans are pessimistic about the financial health of older Americans. Most say that, 30 years from now, those ages 65 and older will be less prepared for retirement than their counterparts today. And, among those who have not yet retired, a large majority (83%) doubt that Social Security will provide benefits at current levels when they eventually retire. About as many predict that most people will have to work into their 70s in order to afford to retire. 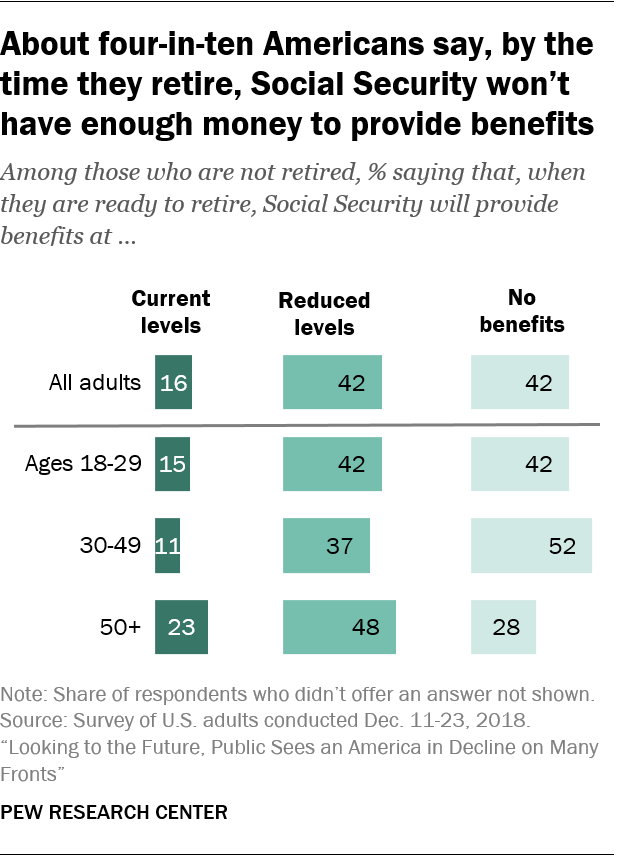 There is widespread skepticism about the future solvency of the Social Security system. Among those who are not retired, about four-in-ten (42%) doubt they will receive any Social Security benefits when they leave the workforce, while an additional 42% say benefits will be provided but at a reduced level.

These views differ significantly by age. Roughly half of Americans (48%) who are younger than 50 expect to receive no Social Security benefits when they retire. By contrast, about three-in-ten (28%) of those who are 50 or older are similarly pessimistic. But, even among this older group, relatively few (23%) expect to receive Social Security benefits at current levels.

Democrats and Republicans are united in their skepticism about the future of Social Security. Among those who are not retired, identical shares from each party (42%) say they don’t expect to receive benefits when they stop working. 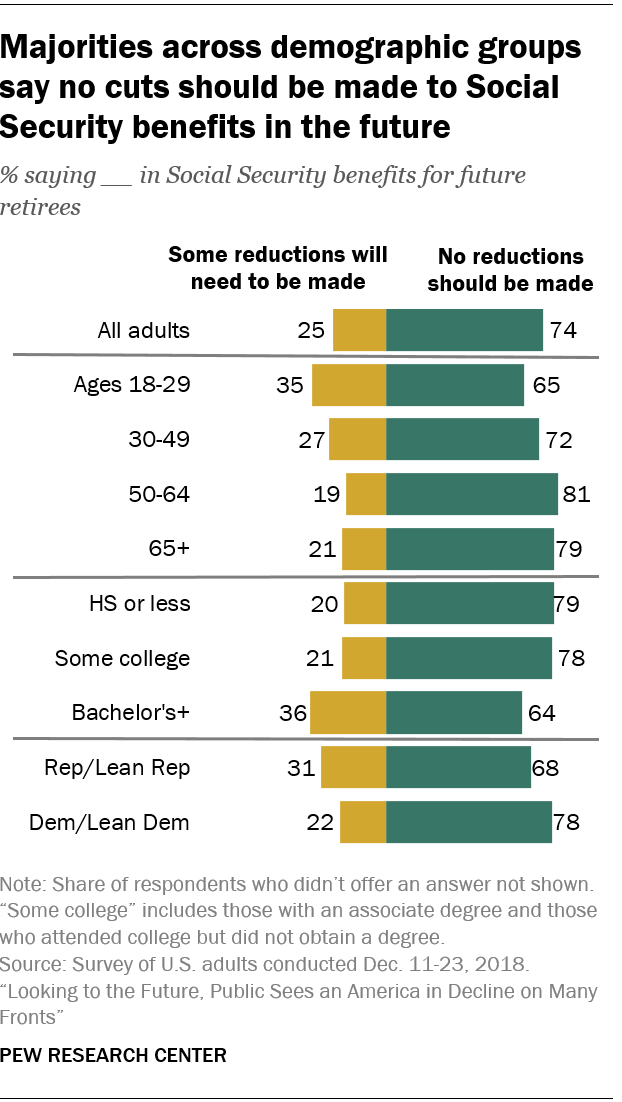 Views on this differ somewhat by age, with younger adults more likely to say that some cuts in future benefits will be necessary. Among those ages 18 to 29, about a third (35%) hold this view compared with 27% of those ages 30 to 49 and 20% of those ages 50 and older. Views also differ by educational attainment: While roughly a third of those with a bachelor’s degree or more education (36%) say benefits will have to be reduced for future retirees, only about one-in-five (21%) of those with less education agree. 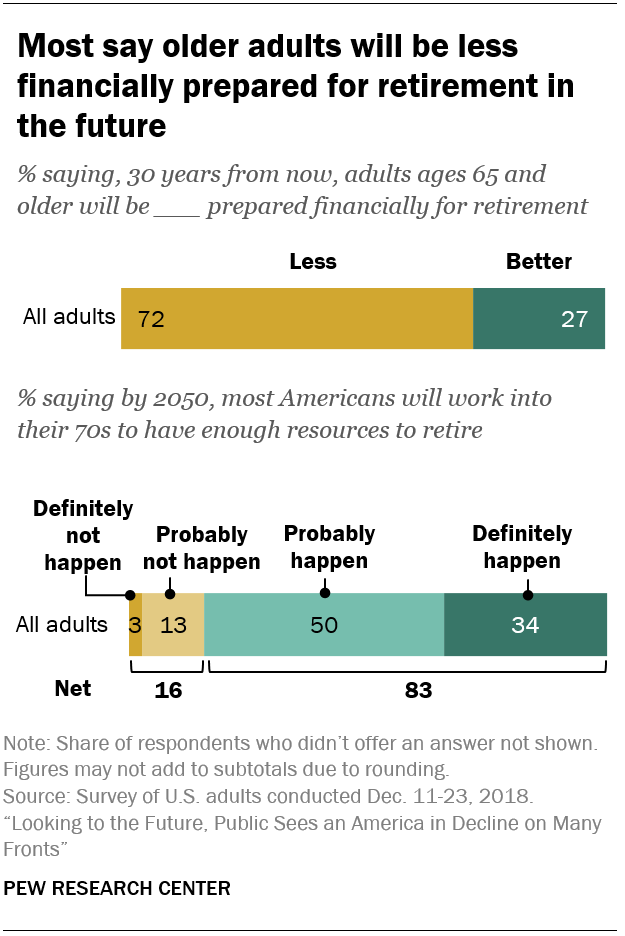 Blacks and Hispanics are somewhat more optimistic about this than whites, and those without a bachelor’s degree are somewhat more upbeat than those with more education. Even so, the predominant view across all major demographic groups is that adults ages 65 and older will be less prepared for retirement 30 years from now compared with those who are that age today.

Consistent with these concerns, a large majority of adults think that, in 30 years, most Americans will work into their 70s in order to have enough resources to retire. About a third of adults (34%) say this will definitely happen, and an additional 50% say this will probably happen. Relatively few think adults will probably not have to work longer to retire (13%), while 3% say they definitely won’t.

Most demographic groups generally agree that people in the future will have to work longer to be financially secure enough to retire. Young adults ages 18 to 29 are somewhat less likely than their older counterparts to say this will definitely happen (25% vs. 36% of those ages 30 and older), but large majorities across all age groups say it is at least probable.

Most say cost of long-term care for older adults will fall to families, individuals

With a growing number of older adults and increased life expectancy, questions about who will care for those who can’t care for themselves and who will bear the cost of that care loom large. There’s a disconnect between who the public thinks should be responsible for paying for the care of older adults may need and who the public thinks will end up being responsible. 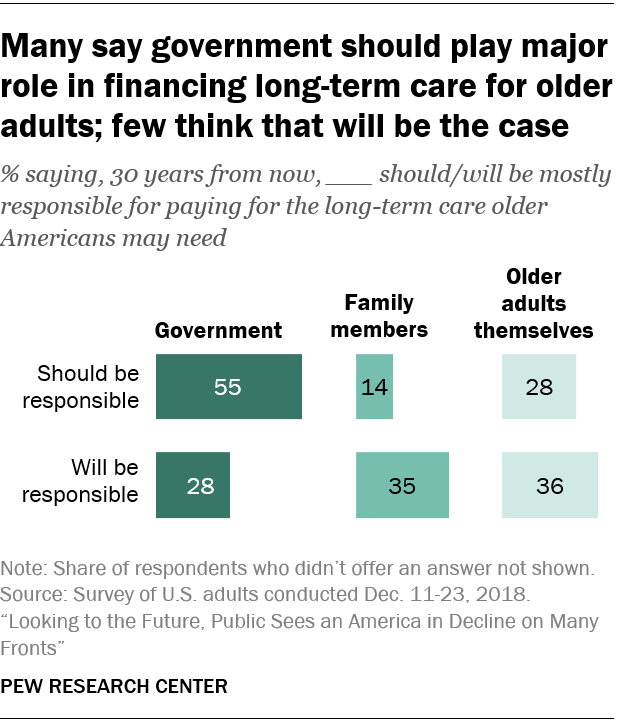 But, when asked who will likely be most responsible in the future for paying for this care, a majority of Americans say the burden will mainly fall on older adults themselves (36%) or their families (35%). A somewhat smaller share (28%) say government will be mostly responsible for paying for the long-term care older adults may need in the future.

Key demographic groups differ about who should pay for long-term care, but there is more agreement over who will be responsible. 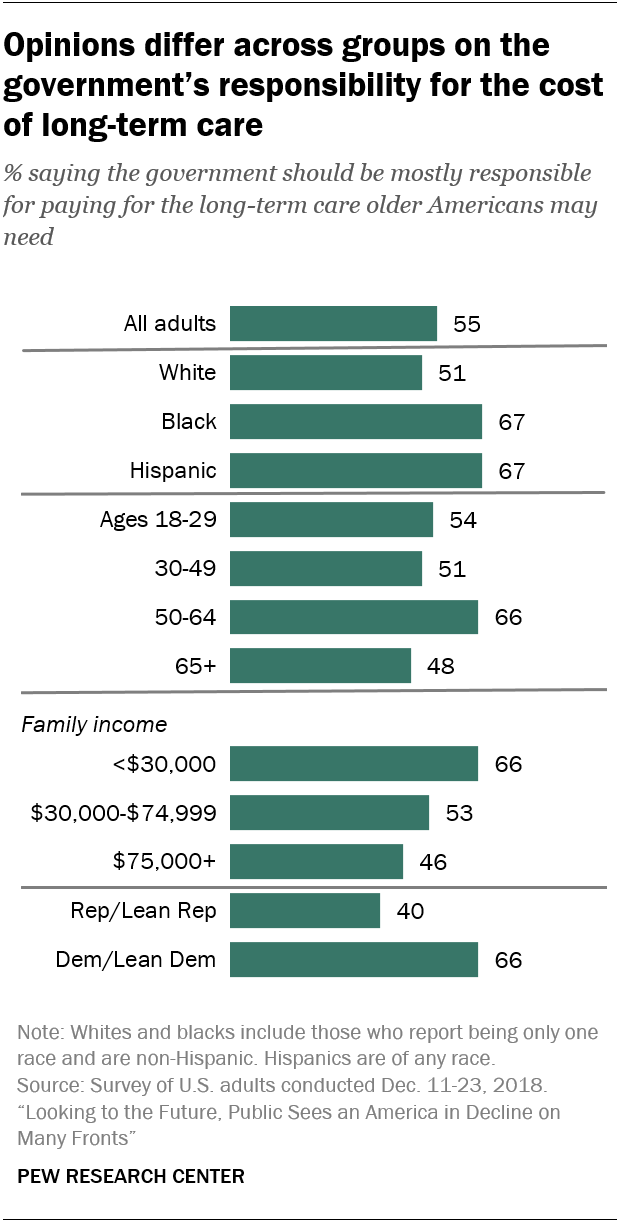 Two-thirds of blacks and Hispanics say government should be mostly responsible for paying for long-term care, while about half of whites (51%) say the same. Adults ages 50 to 64 – those approaching retirement age – are more likely than other age groups to say government should be mostly responsible for this (66% of 50- to 64-year-olds say this compared with about half of all other age groups, including those 65 and older).

Lower-income adults are also more likely to say government should have the primary responsibility for this – 66% among those with annual family incomes below $30,000 hold this view, compared with about half of those with higher incomes.

When it comes to who will be most responsible for shouldering the cost of long-term care for older adults in the future, Democrats and Republicans do not differ significantly in their views. Whites (41%) are more likely than blacks (27%) and Hispanics (20%) to say older adults themselves will be the ones to pay for this care. Higher-income adults (43% among those in families with incomes of $75,000 or more) are more likely than those with lower incomes (33%) to say the same.

Next: 5. The future of work in the automated workplace Next Page → ← Prev Page