In order to achieve a reliable sample size of veterans, two online probability-based panels were used: KnowledgePanel and Pew Research Center’s American Trends Panel (ATP). The subsample from the ATP was selected by sampling all active panelists who reported being a veteran in the annual profile survey. All active panelists from Ipsos’ KnowledgePanel who reported being a veteran were sampled. KnowledgePanel veterans were screened and allowed to fully complete the survey if they confirmed they were a veteran who served after Sept. 11, 2001 (post-9/11). In total, 1,284 veterans responded to the survey.

About the Ipsos KnowledgePanel

About the American Trends Panel 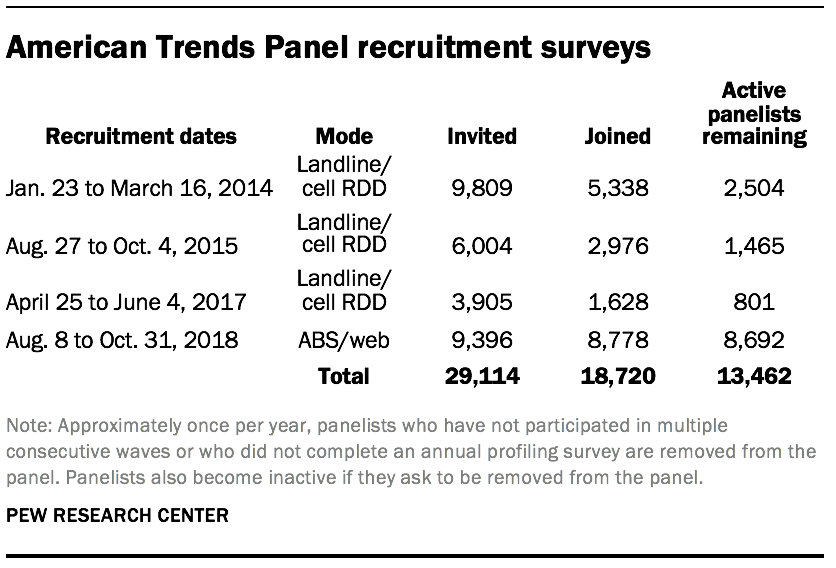 In August 2018, the ATP switched from telephone to address-based recruitment. Invitations were sent to a random, address-based sample (ABS) of households selected from the U.S. Postal Service’s Delivery Sequence File. In each household, the adult with the next birthday was asked to go online to complete a survey, at the end of which they were invited to join the panel. For a random half-sample of invitations, households without internet access were instructed to return a postcard. These households were contacted by telephone and sent a tablet if they agreed to participate. A total of 9,396 were invited to join the panel, and 8,778 agreed to join the panel and completed an initial profile survey. Of the 18,720 individuals who have ever joined the ATP, 13,462 remained active panelists and continued to receive survey invitations at the time this survey was conducted.

The U.S. Postal Service’s Delivery Sequence File has been estimated to cover as much as 98% of the population, although some studies suggest that the coverage could be in the low 90% range.3

The final survey dataset contains two sample weight variables: one for the total general population adult sample and one for the total combined ATP+KP veteran sample. Each weight was created with a base weight reflecting the probability of selection followed by calibration to known demographics of the target population.

For the veterans weight, Ipsos scaled the KP and ATP base weights proportional to effective sample size. Then they downweighted the combined ATP and KP post-9/11 veterans to be 19.42% of the combined sample (based on ACS benchmark). Finally, the weight was raked to benchmark veteran population demographic targets computed from the 2017 American Community Survey. 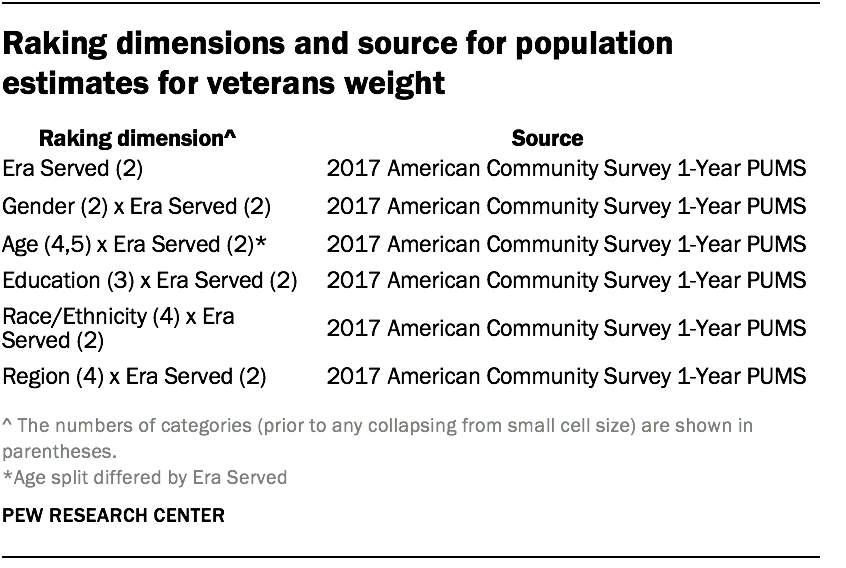 Weights were scaled to sum to the unweighted sample size of qualified veterans. Weights were then trimmed separately among post and pre-9/11 veterans.

For the general population weight, Ipsos started with the KnowledgePanel base weights and then raked to national demographic targets for the age 18+ population on the following variables computed from the Current Population Survey and the American Community Survey: 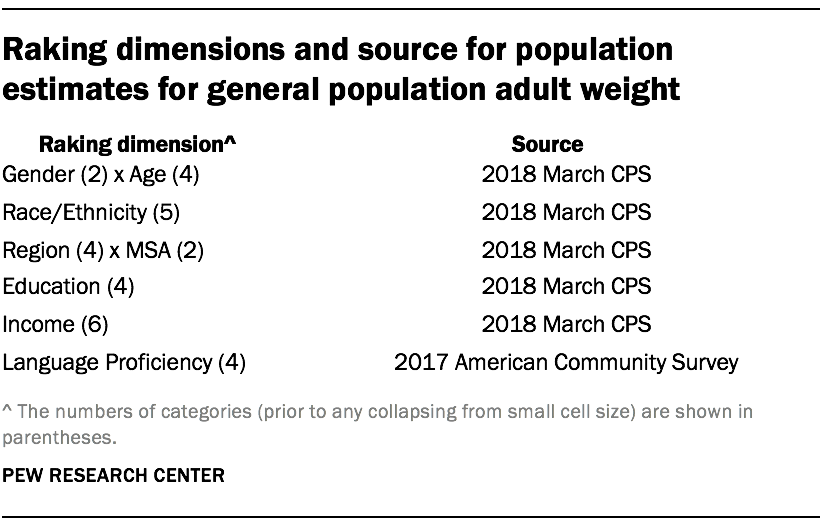 Weights were scaled to sum to the unweighted sample size of the general population adult respondents.