3. The transition to post-military employment

For many veterans, finding a job after leaving the military is an important part of the transition to civilian life. A majority of veterans say their military service was useful in giving them the skills and training they needed for a job outside the military – 29% say it was very useful and another 29% say it was fairly useful. 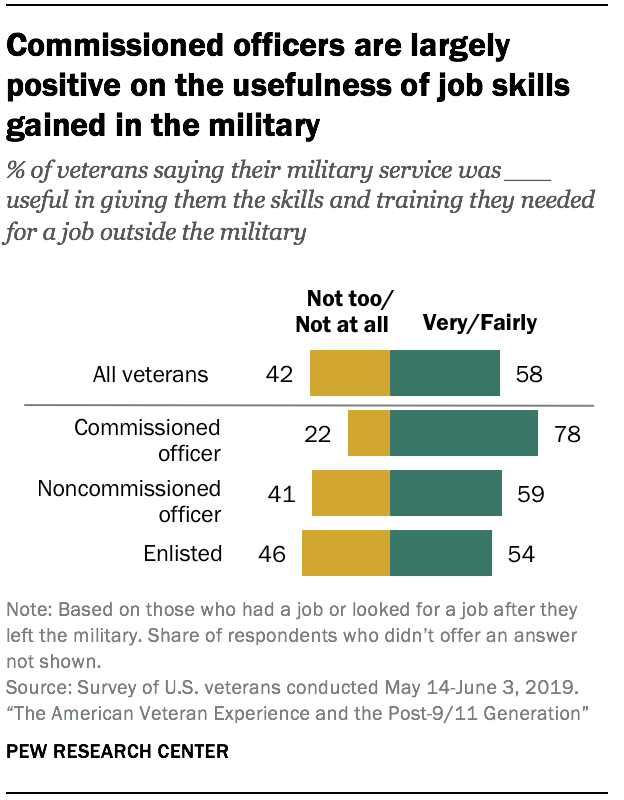 While there are not significant differences between veterans who served in combat and those who didn’t in terms of how they assess the usefulness of their military service, there are differences by number of deployments. Veterans who were deployed three or more times are more likely to say their military service was very or fairly useful in giving them the skills and training needed for a civilian job compared with veterans who were deployed two or fewer times (71% vs. 53%). There is little difference between those veterans who have never been deployed (54%) and those who have been deployed one or two times (51%). 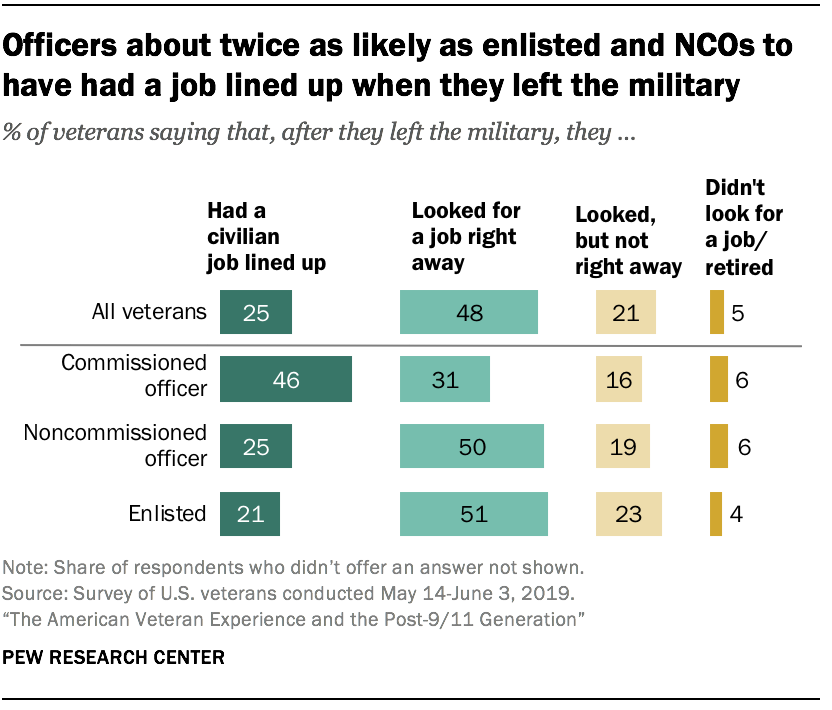 Veterans who served as commissioned officers while on active duty are about twice as likely as those who were NCOs or enlisted personnel to say they had a civilian job lined up when they left the military (46% of commissioned officers vs. 25% of NCOs and 21% of enlisted). About half of NCOs (50%) and enlisted personnel (51%) say they looked for a civilian job directly after leaving the military.

The timing of the transition to employment for veterans does not differ significantly based on the types of experiences they had while on active duty. Veterans who say they had emotionally traumatic or distressing experiences related to their military service are just as likely as those who did not have these types of experiences to say they had a job lined up when they left the military (24% and 26%, respectively). And among those who didn’t already have a job lined up, similar shares say they looked for a job right away after leaving the military (64% and 66%).

A closer look at post-9/11 veterans who did not have a job lined up directly after the completion of their military service shows that, regardless of when they started looking, 57% say it took them less than six months to find a job. An additional 21% say they had a job within a year of the start of their search. Some 16% say it took them more than a year to find a job, and 6% say they were not able to find one.

Female veterans are more likely than their male counterparts to say they enrolled in school after leaving the military (60% vs. 46%). And veterans who served as NCOs are more likely than either commissioned officers or enlisted personnel to say they enrolled in school (55% of NCOs vs. 40% of commissioned officers and 44% of enlisted). 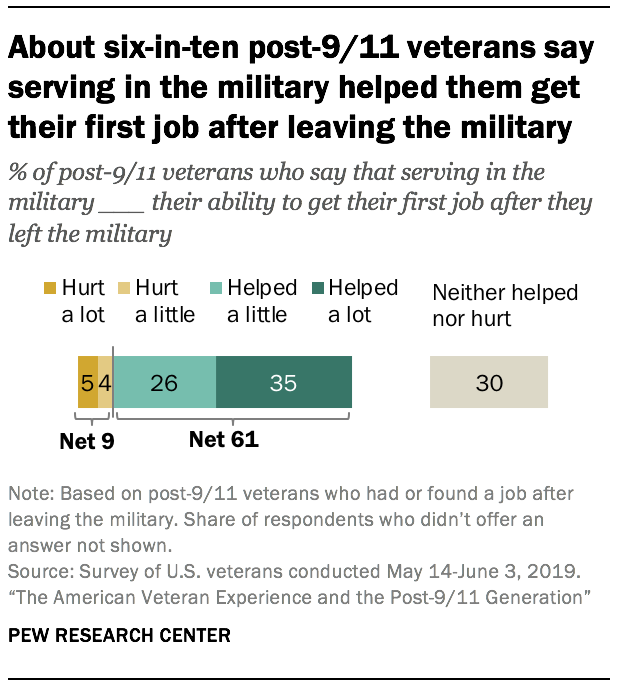 While most post-9/11 veterans say their military service was an advantage when it came to getting their post-military job, many say that job was not a perfect fit. About four-in-ten (42%) say they felt overqualified for their first job after leaving the military based on their skills, experience and training; 46% say their qualifications were about right, and 12% felt underqualified.

In their work life after the military, veterans report that their veteran status comes into play to varying degrees. Among all those who are currently employed, 28% of veterans say the people they interact with at work mostly don’t know about their previous military service. This is more likely to be the case for pre-9/11 veterans than for those who served after 9/11: 32% and 18%, respectively, say people they work with mostly don’t know they served in the military. 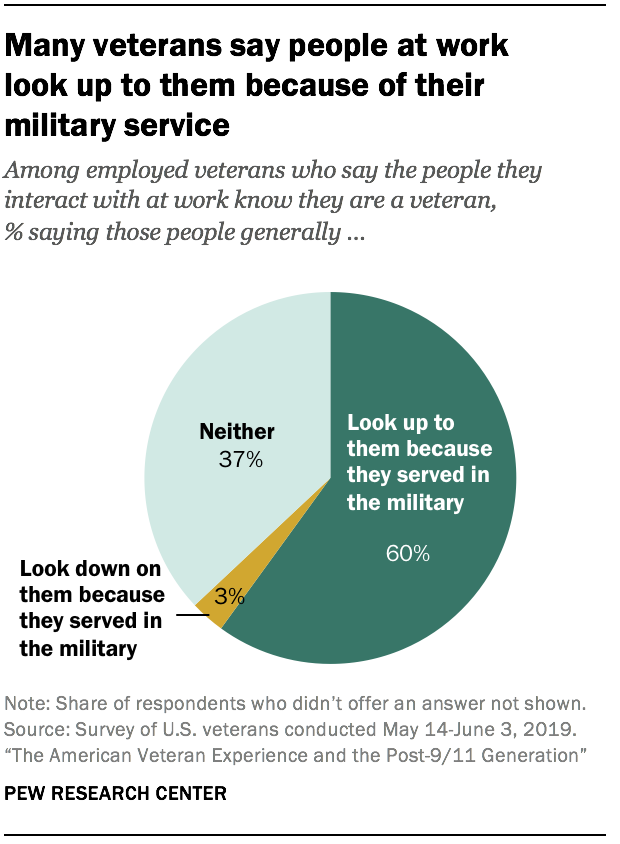 For those veterans whose veteran status is well known at work, this is largely a positive thing. Six-in-ten employed veterans whose coworkers are aware of their military service say people they interact with at work generally look up to them because of their military experience, only 3% say people look down on them because they served in the military, and 37% say people neither look up to nor down on them.

These responses are similar across eras. Among veterans who served prior to 9/11, 61% of those who say people they interact with at work know they are veterans say those people look up to them because they served in the military. Among post-9/11 veterans, that share is 58%.

Next: 4. How veterans and the public see each other and themselves Next Page → ← Prev Page