For many veterans, combat experiences strengthened them personally but also made the transition to civilian life difficult

What it means to be a military veteran in the United States is being shaped by a new generation of service members. About one-in-five veterans today served on active duty after the terrorist attacks of Sept. 11, 2001. Their collective experiences – from deployment to combat to the transition back to civilian life – are markedly different from those who served in previous eras. 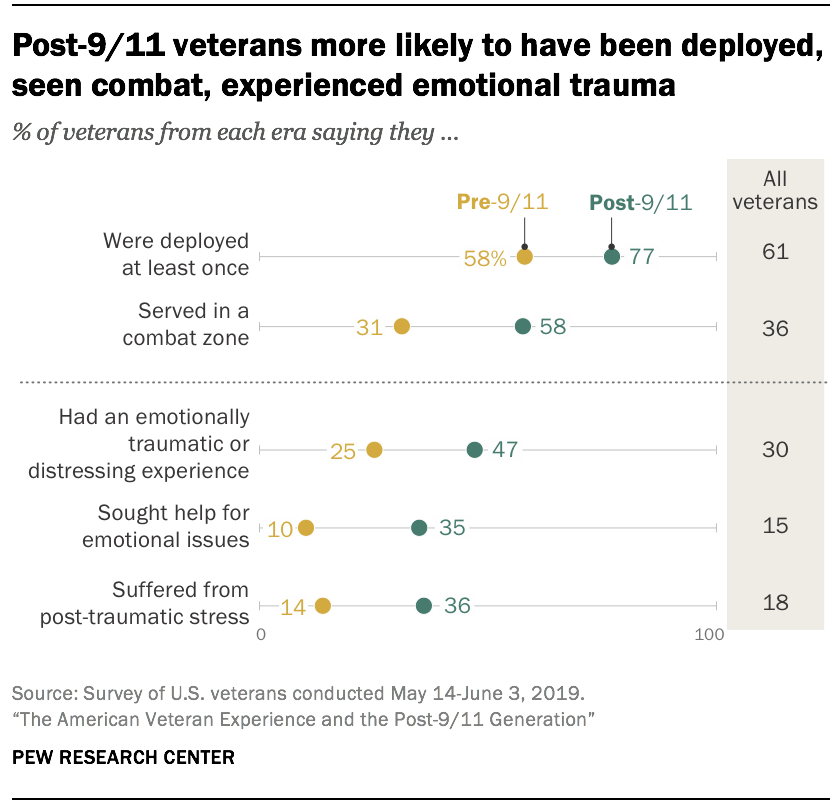 Roughly three-quarters of post-9/11 veterans were deployed at least once, compared with 58% of those who served before them. And post-9/11 veterans are about twice as likely as their pre-9/11 counterparts to have served in a combat zone.

Because they are more likely to have been deployed and to have seen combat, post-9/11 veterans are also more likely to bear the scars of battle, whether physical or not. Roughly half say they had emotionally traumatic or distressing experiences related to their military service, and about a third say they sought professional help to deal with those experiences. In addition, 36% say that – regardless of whether they have sought help – they think they have suffered from post-traumatic stress (PTS), according to a new Pew Research Center survey of U.S. military veterans.1

How we defined veterans

For this study, veterans were defined as men and women who do not currently serve on active duty in the U.S. military but did so in the past. This includes anyone who reported previous full-time service in the Army, Navy, Air Force, Marines or Coast Guard.

Individuals were also considered to be veterans if they were mobilized or deployed while serving in the reserves for any of the five military branches. Reservists who participated in training but were not otherwise called to full-time duty were not included in the sample. Those with past service in the Army National Guard or Air National Guard were considered veterans if they were mobilized to full-time military service by their branch of service or the federal government.

National Guardsmen who were only activated by their state’s governor (for example in response to natural disasters or other state emergencies) were not included in the sample.

In thinking about their service, a majority of all veterans express pride. Still, those who served in the post-9/11 era are somewhat less likely than their predecessors to say they frequently felt proud after leaving the military (58% vs. 70%).

For many veterans, the imprint of war is felt beyond their tour of duty and carries over into the transition from military to civilian life. This is true regardless of era of service. When asked about their experiences in the first few years after leaving the military, combat veterans are less likely than those who didn’t serve in combat to say they frequently felt optimistic about their future, and they are more likely to say they didn’t get the respect they deserved, struggled with the lack of structure in civilian life, and felt disconnected from family or friends. 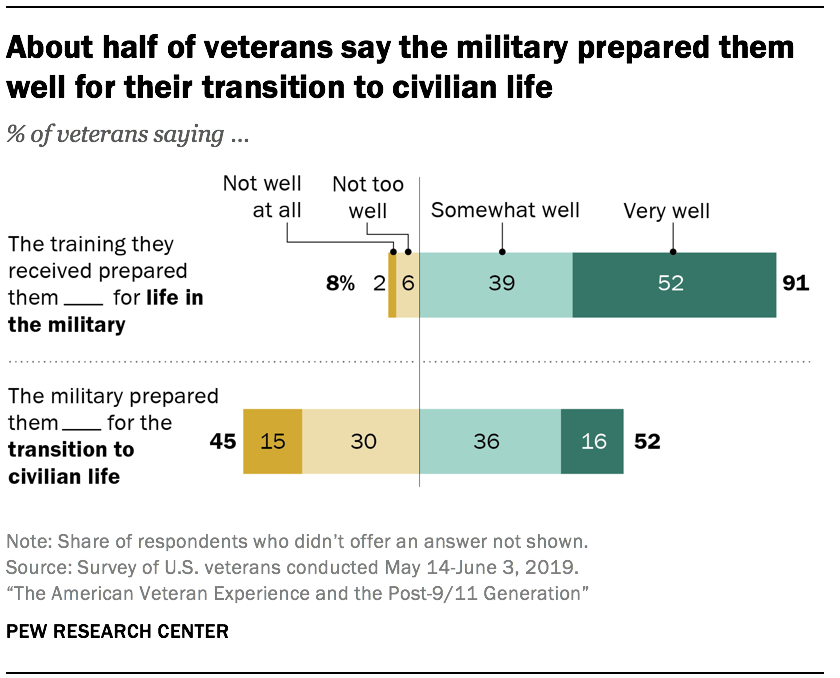 Veterans give the military high marks for preparing them to serve. Roughly nine-in-ten say the training they received when they first entered the military prepared them very or somewhat well for military life. Post-9/11 and pre-9/11 veterans offer similarly positive assessments of their training and readiness.

However, they are less affirmative about the job the military did preparing them for the transition to civilian life. About half of all veterans say the military prepared them very or somewhat well; a similar share says the military didn’t prepare them too well or at all. 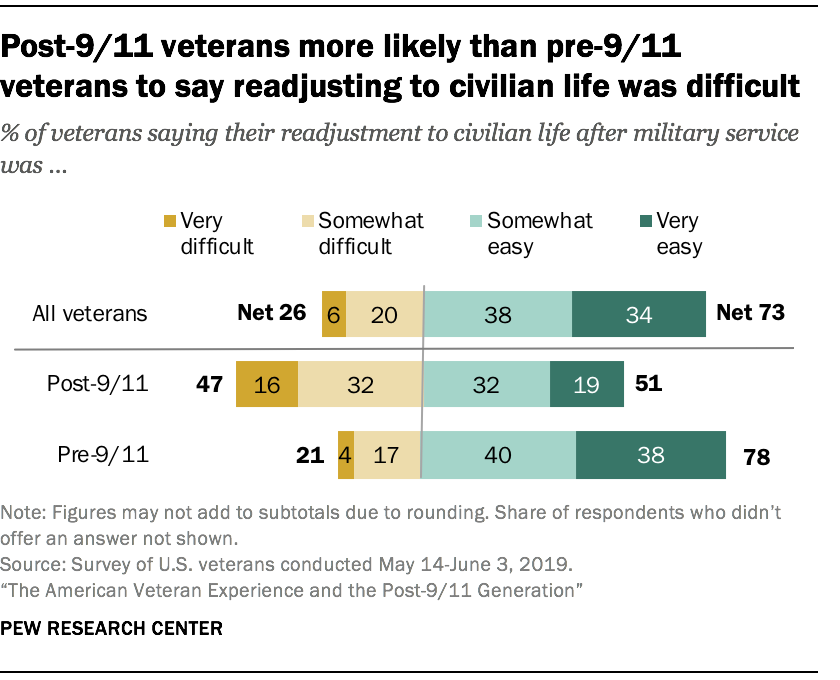 The challenges some veterans face during the transition can be financial, emotional and professional. About a third of veterans say they had trouble paying their bills in their first few years after leaving the military, and roughly three-in-ten say they received unemployment compensation. One-in-five say they struggled with alcohol or substance abuse. Veterans who had emotionally traumatic experiences related to their military service are more likely than those who did not to report experiencing these things.

When it comes to employment specifically, a majority of veterans say their military service was useful in giving them the skills and training they needed for a job outside the military. Veterans who served as commissioned officers in the military are significantly more likely than those who served as noncommissioned officers or enlisted personnel to say their military training was good preparation for a civilian job.

Veterans, public say most Americans look up to people who served in the military; majorities associate discipline and patriotism with veterans

Majorities of the public across gender, age groups and political parties say veterans are generally looked up to by most Americans. Among veterans, this sentiment is echoed across eras of service.

Similarly, a large majority of veterans (71%) say the term patriotic better describes those who served in the military than those who did not; 59% of the pubic shares this view. About a third of Americans say patriotism isn’t related to whether one is a veteran or not. 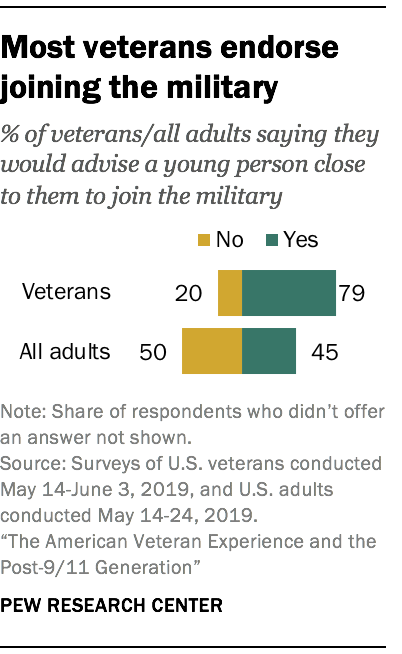 Next: 1. Deployment, combat and their consequences Next Page → ← Prev Page