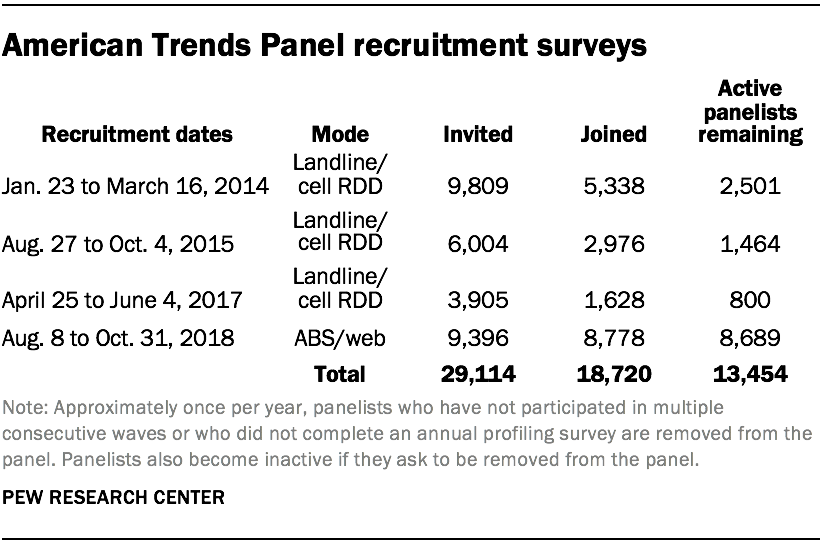 Data in this report are drawn from the panel wave conducted June 25 to July 8, 2019. A total of 9,834 panelists responded out of 13,454 who were sampled, for a response rate of 73%. This does not include 11 panelists who were removed from the data due to extremely high rates of refusal or straightlining. The cumulative response rate accounting for nonresponse to the recruitment surveys and attrition is 3.5%. The break-off rate among panelists who logged onto the survey and completed at least one item is 1%. The margin of sampling error for the full sample of 9,834 respondents is plus or minus 1.5 percentage points.

In August 2018, the ATP switched from telephone to address-based recruitment. Invitations were sent to a random, address-based sample (ABS) of households selected from the U.S. Postal Service’s Delivery Sequence File. In each household, the adult with the next birthday was asked to go online to complete a survey, at the end of which they were invited to join the panel. For a random half-sample of invitations, households without internet access were instructed to return a postcard. These households were contacted by telephone and sent a tablet if they agreed to participate. A total of 9,396 were invited to join the panel, and 8,778 agreed to join the panel and completed an initial profile survey. Of the 18,720 individuals who have ever joined the ATP, 13,454 remained active panelists and continued to receive survey invitations at the time this survey was conducted.

The U.S. Postal Service’s Delivery Sequence File has been estimated to cover as much as 98% of the population, although some studies suggest that the coverage could be in the low 90% range.11

Sampling errors and test of statistical-significance take into account the effect of weighting. Interviews are conducted in both English and Spanish, but the American Trends Panel’s Hispanic sample is predominantly U.S. born and English speaking.

The analysis of the question about whether the institution of marriage is becoming obsolete is based on telephone interviews conducted June 25 to June 30, 2019, among a national sample of 1,015 adults, ages 18 and older, living in the United States (306 respondents were interviewed on a landline telephone, and 709 were interviewed on a cellphone, including 481 who had no landline telephone). The survey was conducted under the direction of SSRS. A combination of landline and cellphone random-digit-dial samples were used; both samples were provided by Marketing Systems Group. Interviews were conducted in English and Spanish. Respondents in the landline sample were selected by randomly asking for the youngest adult male or female who is now at home. Interviews in the cell sample were conducted with the person who answered the phone if that person was an adult age 18 or older.

The combined landline and cellphone sample is weighted to provide nationally representative estimates of the adult population ages 18 and older. The weighting process takes into account the disproportionate probabilities of household and respondent selection due to the number of separate telephone landlines and cellphones answered by respondents and their households, as well as the probability associated with the random selection of an individual household member. Following application of the above weights, the sample is post-stratified and balanced by key demographics such as age, race, sex, region, education and Hispanic nativity. The sample is also weighted to reflect the distribution of phone usage in the general population, meaning the proportion of those who are cellphone only, landline only, and mixed users.

The following table shows the unweighted sample size and the error attributable to sampling that would be expected at the 95% level of confidence in the survey:

Chapter 1 of this report is based primarily on two data sources: The Current Population Survey (CPS) Annual Social and Economic Supplement and the National Survey of Family Growth (NSFG).

The CPS is conducted jointly by the U.S. Bureau of Labor Statistics and the Census Bureau and produces a nationally representative sample of the non-institutionalized U.S. population. Since 2007, it has asked a direct question about the cohabitation status of all relevant household members. From 1995 to 2006, the cohabitation status of unmarried household heads only was inferred, based on whether anyone else in the household roster was listed as the unmarried partner of the household head. Because cohabitation information was only obtained for the household head, and the partner of the head; and because cohabitation was only established indirectly, the prevalence of cohabitation was underestimated in these earlier years. Therefore, the size of the rise in cohabitation since 1995 should be interpreted with caution. It’s also worth noting that, prior to 2017, the CPS did not allow respondents to report being in a same-sex marriage; instead the Census Bureau recoded same-sex couples as either cohabiting (starting in 2010), or as in opposite-sex marriages (prior to 2010).

The CPS microdata used in this report are from the Integrated Public Use Microdata Series (IPUMS) provided by the University of Minnesota. IPUMS assigns uniform codes, to the extent possible, to data collected in the CPS over the years. More information about IPUMS, including variable definitions and sampling error, is available at http://cps.ipums.org/cps/documentation.shtml.

The NSFG is conducted by the National Center for Health Statistics, and since 2002 has produced a nationally representative sample of the civilian population of people of childbearing age. Analyses here include respondents ages 18 to 44, and are based primarily on data from the 2013-2015 and the 2015-2017 waves. (Data from these waves were combined in order to increase sample size.)