By Ruth Igielnik and Kim Parker 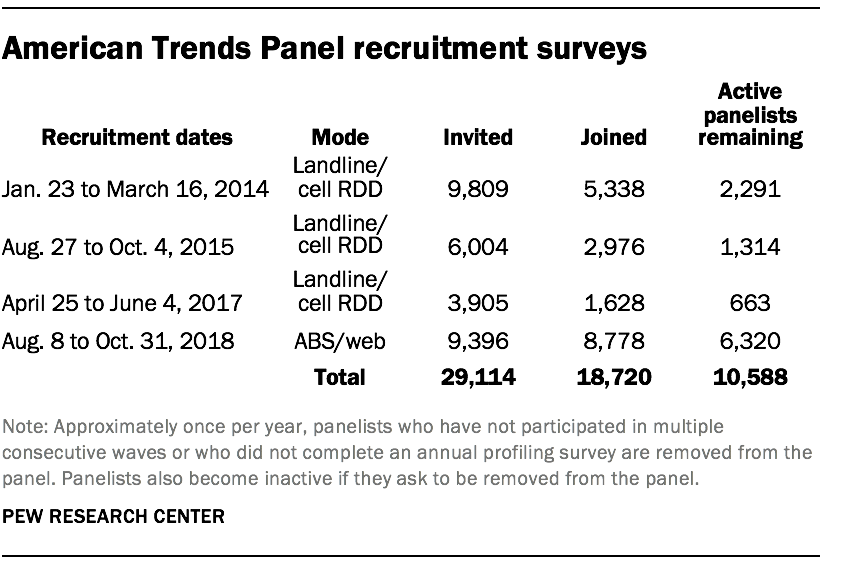 Data in this report are drawn from the panel wave conducted September 16 to September 29, 2019. A total of 6,878 panelists responded out of 7,347 who were sampled, for a response rate of 93.6%. This does not include one panelist who was removed from the data due to an extremely high rate of refusal. The cumulative response rate accounting for nonresponse to the recruitment surveys and attrition is 6.2%. The break-off rate among panelists who logged onto the survey and completed at least one item is 0.8%. The margin of sampling error for the full sample of 6,878 respondents is plus or minus 1.6 percentage points.

The sample consisted of all existing panelists who had completed the annual profile survey as of September 9, 2019. Panelists who had not yet completed the profile survey were ineligible. A subsample from the ATP was selected by grouping panelists into five strata so demographic groups that are underrepresented in the panel had a higher probability of selection than overrepresented groups:

In August 2018, the ATP switched from telephone to address-based recruitment. Invitations were sent to a random, address-based sample (ABS) of households selected from the U.S. Postal Service’s Delivery Sequence File. In each household, the adult with the next birthday was asked to go online to complete a survey, at the end of which they were invited to join the panel. For a random half-sample of invitations, households without internet access were instructed to return a postcard. These households were contacted by telephone and sent a tablet if they agreed to participate. A total of 9,396 were invited to join the panel, and 8,778 agreed to join the panel and completed an initial profile survey. Of the 18,720 individuals who have ever joined the ATP, 10,588 remained active panelists and continued to receive survey invitations at the time this survey was conducted.

The U.S. Postal Service’s Delivery Sequence File has been estimated to cover as much as 98% of the population, although some studies suggest that the coverage could be in the low 90% range.1

The metropolitan area cost-of-living adjustment is based on price indexes published by the U.S. Bureau of Economic Analysis. These indexes, known as Regional Price Parities (RPP), compare the prices of goods and services across 383 metropolitan statistical areas as well as non-metro areas with the national average prices for the same goods and services. The most recent available data is from 2017.

The national estimates presented in the analysis encompass the U.S. adult population. Those who fall outside of the 371 metropolitan statistical areas found Wave 54 of the ATP are assigned the RPP for their state’s non-metropolitan area.

Family incomes are then adjusted for the number of people in a household using the methodology from Pew Research Center’s previous work on the American middle class. That is done because a four-person household with an income of, say, $50,000 faces a tighter budget constraint than a two-person household with the same income.

“Middle-income” adults live in families with annual incomes that are two-thirds to double the median family income in this ATP sample, after incomes have been adjusted for household size and the local cost of living. The median family income for this sample is about $34,749. Using this median income, the middle-income range is about $40,100 to $120,400 annually for a three-person household. Lower-income families have incomes less than roughly $40,100 and upper-income families have incomes greater than roughly $120,400 (all figures expressed in 2018 dollars).