The American Trends Panel (ATP), created by Pew Research Center, is a nationally representative panel of randomly selected U.S. adults. Panelists participate via self-administered web surveys. Panelists who do not have internet access at home are provided with a tablet and wireless internet connection. The panel is managed by Ipsos. 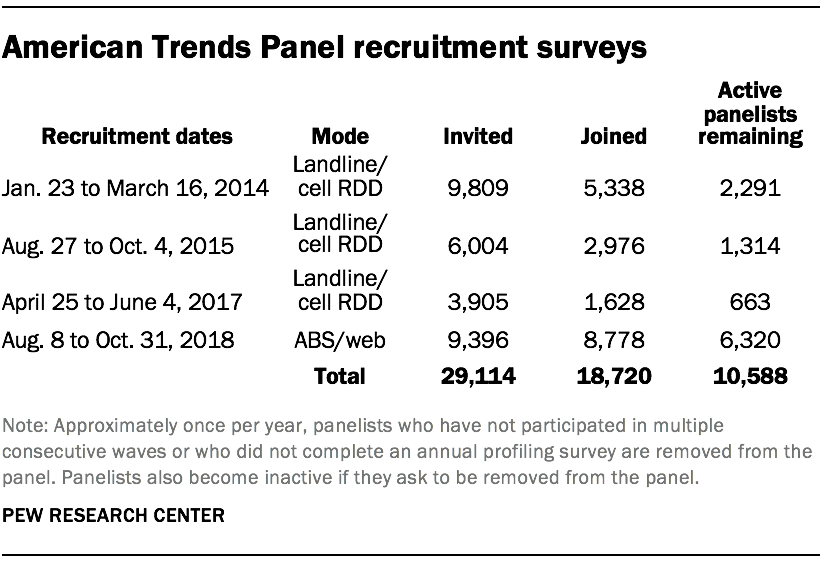 Data in this report are drawn from the panel wave conducted Sept. 16 to Sept. 29, 2019. A total of 6,878 panelists responded out of 7,347 who were sampled, for a response rate of 93.6%. This does not include one panelist who was removed from the data due to an extremely high rate of refusal. The cumulative response rate accounting for nonresponse to the recruitment surveys and attrition is 6.2%. The break-off rate among panelists who logged onto the survey and completed at least one item is 0.8%. The margin of sampling error for the full sample of 6,878 respondents is plus or minus 1.6 percentage points.

The sample consisted of all existing panelists who had completed the annual profile survey as of Sept. 9, 2019. Panelists who had not yet completed the profile survey were ineligible. A subsample from the ATP was selected by grouping panelists into five strata so demographic groups that are underrepresented in the panel had a higher probability of selection than overrepresented groups:

In August 2018, the ATP switched from telephone to address-based recruitment. Invitations were sent to a random, address-based sample (ABS) of households selected from the U.S. Postal Service’s Delivery Sequence File. In each household, the adult with the next birthday was asked to go online to complete a survey, at the end of which they were invited to join the panel. For a random half-sample of invitations, households without internet access were instructed to return a postcard. These households were contacted by telephone and sent a tablet if they agreed to participate. A total of 9,396 were invited to join the panel, and 8,778 agreed to join the panel and completed an initial profile survey. Of the 18,720 individuals who have ever joined the ATP, 10,588 remained active panelists and continued to receive survey invitations at the time this survey was conducted.

The U.S. Postal Service’s Delivery Sequence File has been estimated to cover as much as 98% of the population, although some studies suggest that the coverage could be in the low 90% range.20

The metropolitan area cost-of-living adjustment is based on price indexes published by the U.S. Bureau of Economic Analysis. These indexes, known as Regional Price Parities (RPP), compare the prices of goods and services across 383 metropolitan statistical areas as well as non-metro areas with the national average prices for the same goods and services. The most recent available data is from 2017.

The national estimates presented in the analysis encompass the U.S. adult population. Those who fall outside of the 371 metropolitan statistical areas found in Wave 54 of the ATP are assigned the RPP for their state’s non-metropolitan area.

Family incomes are then adjusted for the number of people in a household using the methodology from Pew Research Center’s previous work on the American middle class. That is done because a four-person household with an income of, say, $50,000 faces a tighter budget constraint than a two-person household with the same income.

Middle-income adults are in families with annual incomes that are two-thirds to double the median family income in this ATP sample, after incomes have been adjusted for household size and the local cost of living. The median family income for this sample is about $34,749. Using this median income, the middle-income range is about $40,100 to $120,400 annually for a three-person household. Lower-income families have incomes less than roughly $40,100 and upper-income families have incomes greater than roughly $120,400 (all figures expressed in 2018 dollars).

In Chapter 1 of the study, the classification of adults into lower-, middle- and upper-income tiers is based on the same principles used in the remainder of the analysis. However, the income ranges that define the boundaries of each income tier are based on incomes as reported in the Current Population Survey – for the analysis of income inequality – and the Survey of Consumer of Finances – for the analysis of wealth inequality.

The income data in Chapter 1 of this report are derived from the Current Population Survey, Annual Social and Economic Supplements (ASEC), which is conducted in March of every year. The specific files used in this report are from March 1971 to March 2019. Conducted jointly by the U.S. Census Bureau and the Bureau of Labor Statistics, the CPS is a monthly survey of approximately 55,000 households and is the source of the nation’s official statistics on unemployment. The ASEC survey in March typically features a larger sample size. Data on income and poverty from the ASEC survey serve as the basis for the well-known Census Bureau report on income and poverty in the United States. The ASEC surveys collect data on the income of a household in the preceding calendar year. Thus, the 1971 to 2019 files used in this report contain data on income from 1970 to 2018.

The wealth analysis is based on the Survey of Consumer Finances (SCF) that is sponsored by the Federal Reserve Board of Governors and the Department of Treasury. It has been conducted every three years since 1983 and is designed to provide detailed information on the finances of U.S. families. The SCF sample typically consists of approximately 4,500 families, but surveys for 2013 and 2016 survey included about 6,000 families. Unlike the CPS, the sampling unit in the SCF is the “primary economic unit” (PEU), not the household. As stated by the Federal Reserve Board, “the PEU is intended to be the economically dominant single person or couple (whether married or living together as partners) and all other persons in the household who are financially interdependent with that economically dominant person or couple.”

Household income is the sum of incomes earned by all members of the household in the calendar year preceding the date of the survey. The CPS collects data on money income received on a regular basis (exclusive of certain money receipts such as capital gains and lump-sum payments) before payments for personal income taxes, Social Security and Medicare taxes, union dues, etc. It includes income received from wages, salary, commissions, bonuses, and tips; self-employment income from own nonfarm or farm businesses, including proprietorships and partnerships; interest, dividends, net rental income, royalty income, or income from estates and trusts; Social Security or Railroad Retirement income; Supplemental Security Income (SSI); any cash public assistance or welfare payments from the state or local welfare office; retirement, survivor, or disability benefits; and any other sources of income received regularly such as Veterans’ (VA) payments, unemployment and/or worker’s compensation, child support, and alimony. It should be noted that income data in the CPS public-use microdata files are top-coded to prevent the identification of a few individuals who might report very high levels of income.

The Census Bureau’s current definition of income is broader than in the past. Data for all years include income received from wages or salary before taxes and deductions, net earnings from own businesses or farms, income from Social Security or Railroad Retirement, other forms of public assistance or welfare, and other sources of income regularly received. Investment income (including dividend payments and net rental income) was added starting with the 1980 sample. Retirement income other than Social Security was added starting in the 1990 sample. Supplemental Security Income (SSI) was added starting in the 2000 sample.

Wealth, or net worth, is the difference between the value of assets owned by households and the value of the liabilities (or debt) held by the household. Assets include items such as the value of an owned home, value of a business, accounts in financial institutions, stocks and bonds, 401(k) and thrift accounts, individual retirement accounts and Keogh accounts, rental properties, motor vehicles and other personal property. Liabilities include home mortgages, credit card debt, student loans, vehicle loans and business debt. The SCF does not account for the discounted values of Social Security benefits or defined benefit pension plans.

The data on income and wealth are adjusted for inflation with the Consumer Price Index Research Series (CPI-U-RS) of the Bureau of Labor Statistics (BLS) as published in the Census Bureau’s income and poverty report. This is the price index series used by the U.S. Census Bureau to deflate the data it publishes on household income. Since 1978, this is the CPI-U-RS index as published by the BLS. For years prior to 1978, the Census Bureau made its own adjustment to the CPI-U to approximate the trend in the CPI-U-RS.

The Census Bureau defines a household as the entire group of persons who live in a single dwelling unit. A household may consist of several persons living together or one person living alone. It includes the household head and all of his or her relatives living in the dwelling unit and also any lodgers, live-in housekeepers, nannies and other residents not related to the head of the household.