1. Trends in income and wealth inequality

Barely 10 years past the end of the Great Recession in 2009, the U.S. economy is doing well on several fronts. The labor market is on a job-creating streak that has rung up more than 110 months straight of employment growth, a record for the post-World War II era. The unemployment rate in November 2019 was 3.5%, a level not seen since the 1960s. Gains on the jobs front are also reflected in household incomes, which have rebounded in recent years.

But not all economic indicators appear promising. Household incomes have grown only modestly in this century, and household wealth has not returned to its pre-recession level. Economic inequality, whether measured through the gaps in income or wealth between richer and poorer households, continues to widen.

Household incomes are growing again after a lengthy period of stagnation 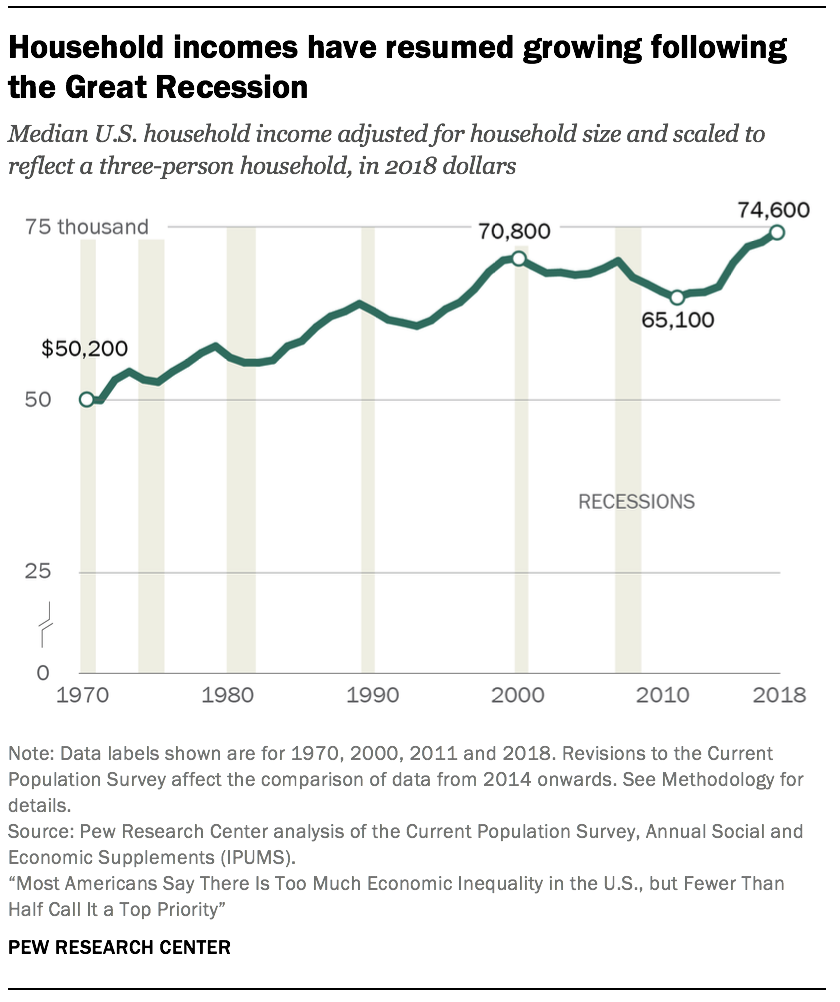 But the overall trend masks two distinct episodes in the evolution of household incomes (the first lasting from 1970 to 2000 and the second from 2000 to 2018) and in how the gains were distributed.

The shortfall in household income is attributable in part to two recessions since 2000. The first recession, lasting from March 2001 to November 2001, was relatively short-lived.7 Yet household incomes were slow to recover from the 2001 recession and it was not until 2007 that the median income was restored to about its level in 2000.

But 2007 also marked the onset of the Great Recession, and that delivered another blow to household incomes. This time it took until 2015 for incomes to approach their pre-recession level. Indeed, the median household income in 2015 – $70,200 – was no higher than its level in 2000, marking a 15-year period of stagnation, an episode of unprecedented duration in the past five decades.8

More recent trends in household income suggest that the effects of the Great Recession may finally be in the past. From 2015 to 2018, the median U.S. household income increased from $70,200 to $74,600, at an annual average rate of 2.1%. This is substantially greater than the average rate of growth from 1970 to 2000 and more in line with the economic expansion in the 1980s and the dot-com bubble era of the late 1990s.

The rise in economic inequality in the U.S. is tied to several factors. These include, in no particular order, technological change, globalization, the decline of unions and the eroding value of the minimum wage. Whatever the causes, the uninterrupted increase in inequality since 1980 has caused concern among members of the public, researchers, policymakers and politicians.

One reason for the concern is that people in the lower rungs of the economic ladder may experience diminished economic opportunity and mobility in the face of rising inequality, a phenomenon referred to as The Great Gatsby Curve. Others have highlighted inequality’s negative impact on the political influence of the disadvantaged, on geographic segregation by income, and on economic growth itself. The matter may not be entirely settled, however, as an opposing viewpoint suggests that income inequality does not harm economic opportunity.

This report presents estimates of income inequality based on household income as estimated in the Current Population Survey (CPS), a survey of households conducted by the U.S. Census Bureau in partnership with the Bureau of Labor Statistics. These estimates refer to gross (pretax) income and encompass most sources of income. A key omission is the value of in-kind services received from government sources. Because income taxes are progressive and in-kind services also serve to boost the economic wellbeing of (poorer) recipients, not accounting for these two factors could overstate the true gap in the financial resources of poorer and richer households.

The Congressional Budget Office (CBO) offers an alternative estimate of income inequality that accounts for federal taxes and a more comprehensive array of cash transfers and in-kind services than is possible with Current Population Survey data. The CBO finds that the Gini coefficient in the U.S. in 2016 ranged from 0.595, before accounting for any forms of taxes and transfers, to 0.423, after a full accounting of taxes and transfers. These estimates bracket the Census Bureau’s estimate of 0.481 for the Gini coefficient in 2016. By either estimate, income inequality in the U.S. is found to have increased by about 20% from 1980 to 2016 (The Gini coefficient ranges from 0 to 1, or from perfect equality to complete inequality). Findings from other researchers show the same general rise in inequality over this period regardless of accounting for in-kind transfers. 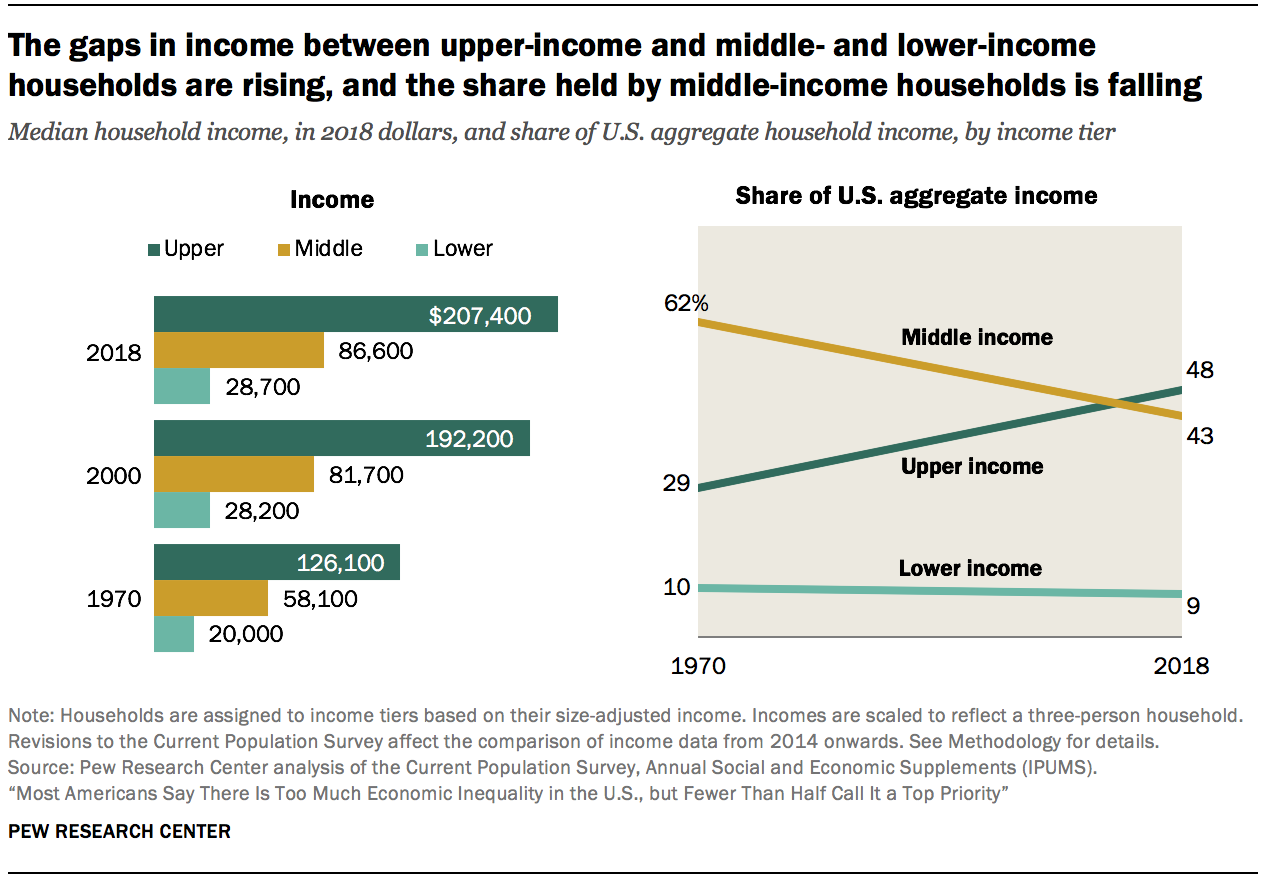 These trends in income reflect the growth in economic inequality overall in the U.S. in the decades since 1980.

Even among higher-income families, the growth in income has favored those at the top. Since 1980, incomes have increased faster for the most affluent families – those in the top 5% – than for families in the income strata below them. This disparity in outcomes is less pronounced in the wake of the Great Recession but shows no signs of reversing. 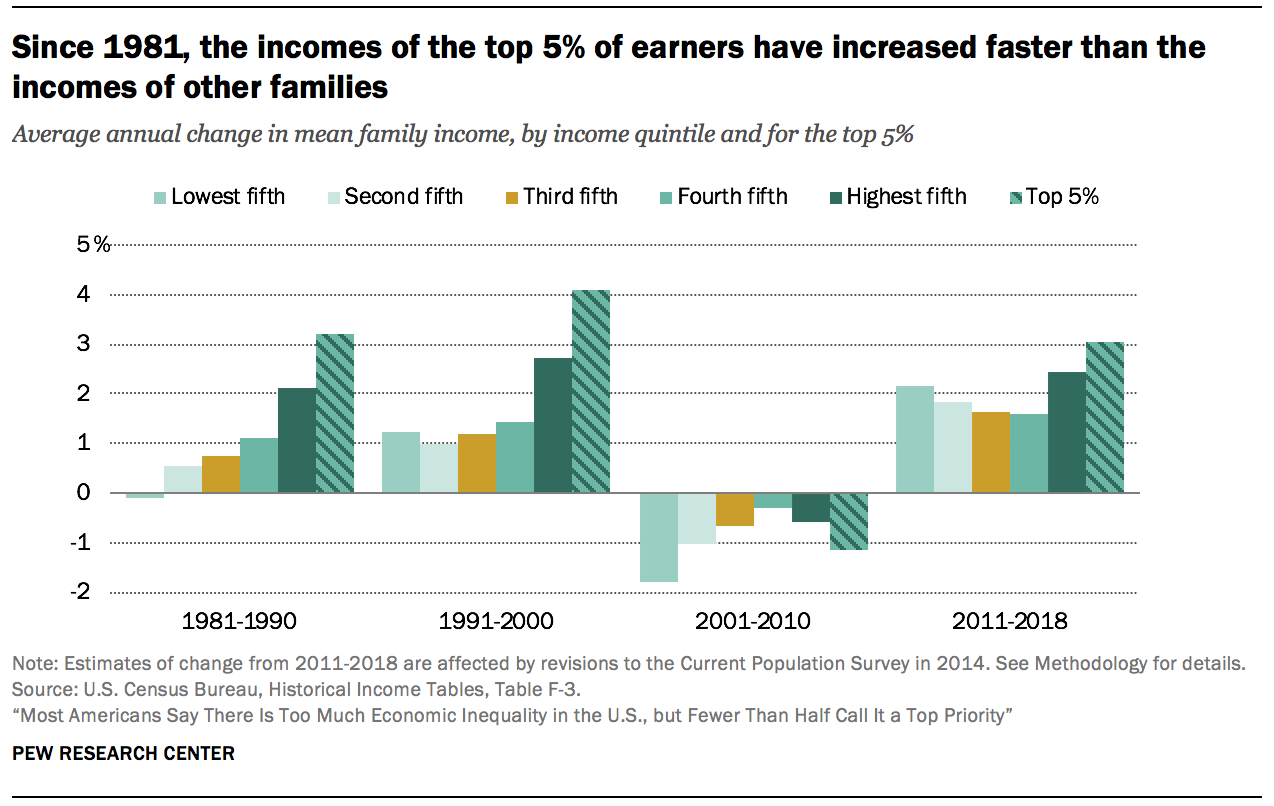 A similar pattern prevailed in the 1990s, with even sharper growth in income at the top. From 1991 to 2000, the mean income of the top 5% of families grew at an annual average rate of 4.1%, compared with 2.7% for families in the highest quintile overall, and about 1% or barely more for other families.

The period from 2001 to 2010 is unique in the post-WWII era. Families in all strata experienced a loss in income in this decade, with those in the poorer strata experiencing more pronounced losses. The pattern in income growth from 2011 to 2018 is more balanced than the previous three decades, with gains more broadly shared across poorer and better-off families. Nonetheless, income growth remains tilted to the top, with families in the top 5% experiencing greater gains than other families since 2011. 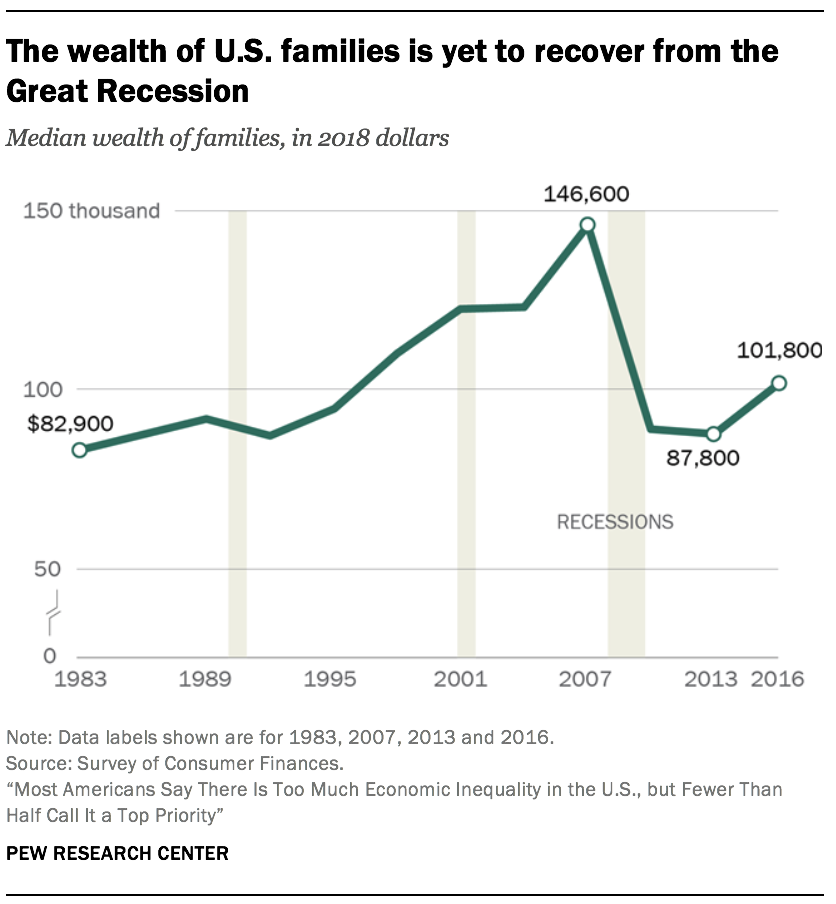 Other than income, the wealth of a family is a key indicator of its financial security. Wealth, or net worth, is the value of assets owned by a family, such as a home or a savings account, minus outstanding debt, such as a mortgage or student loan. Accumulated over time, wealth is a source of retirement income, protects against short-term economic shocks, and provides security and social status for future generations. 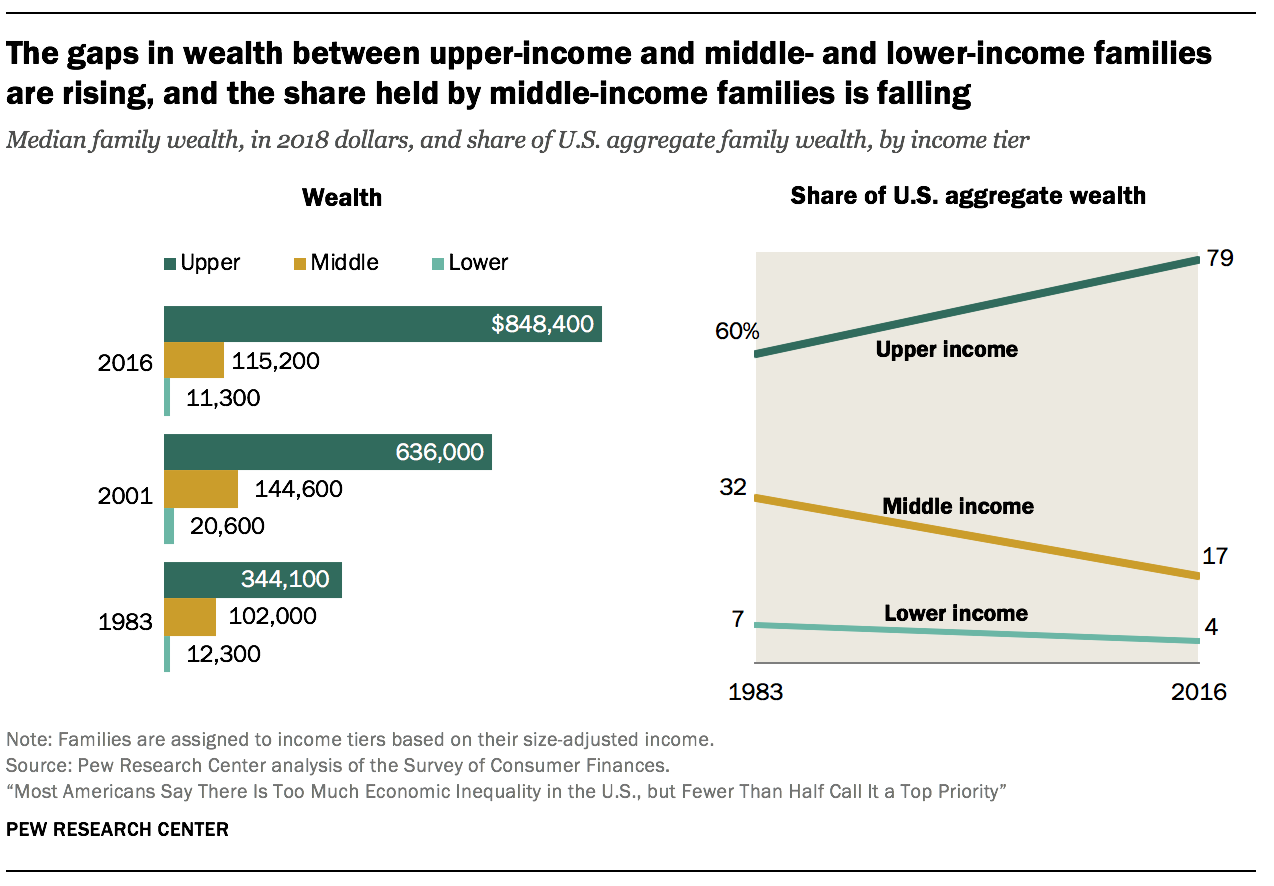 The reason for this is that middle-income families are more dependent on home equity as a source of wealth than upper-income families, and the bursting of the housing bubble in 2006 had more of an impact on their net worth. Upper-income families, who derive a larger share of their wealth from financial market assets and business equity, were in a better position to benefit from a relatively quick recovery in the stock market once the recession ended.

The richest are getting richer faster 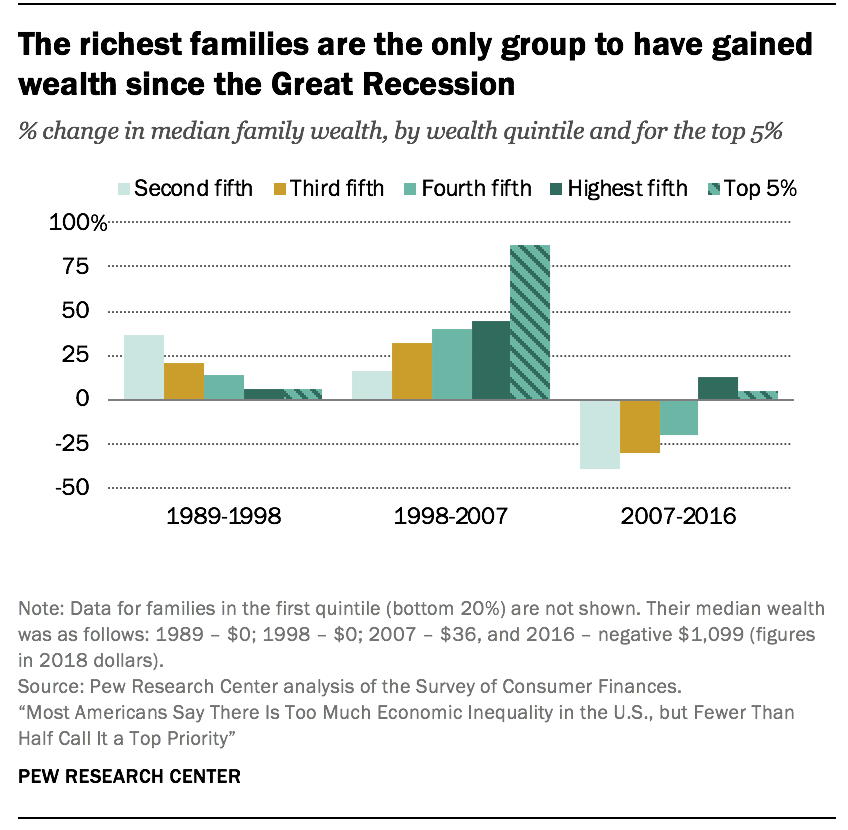 The richest families in the U.S. have experienced greater gains in wealth than other families in recent decades, a trend that reinforces the growing concentration of financial resources at the top.

Income inequality in the U.S has increased since 1980 and is greater than in peer countries

Income inequality may be measured in a number of ways, but no matter the measure, economic inequality in the U.S. is seen to be on the rise.

Not only is income inequality rising in the U.S., it is higher than in other advanced economies. Comparisons of income inequality across countries are often based on the Gini coefficient, another commonly used measure of inequality.15 Ranging from 0 to 1, or from perfect equality to complete inequality, the Gini coefficient in the U.S. stood at 0.434 in 2017, according to the Organization for Economic Cooperation and Development (OECD).16 This was higher than in any other of the G-7 countries, in which the Gini ranged from 0.326 in France to 0.392 in the UK, and inching closer to the level of inequality observed in India (0.495). More globally, the Gini coefficient of inequality ranges from lows of about 0.25 in Eastern European countries to highs in the range of 0.5 to 0.6 in countries in southern Africa, according to World Bank estimates.

Next: 2. Views of economic inequality Next Page → ← Prev Page

Many Americans Get News on YouTube, Where News Organizations and Independent Producers Thrive Side by Side