1. Employment is rising most rapidly in jobs most in need of social, fundamental and analytical skills 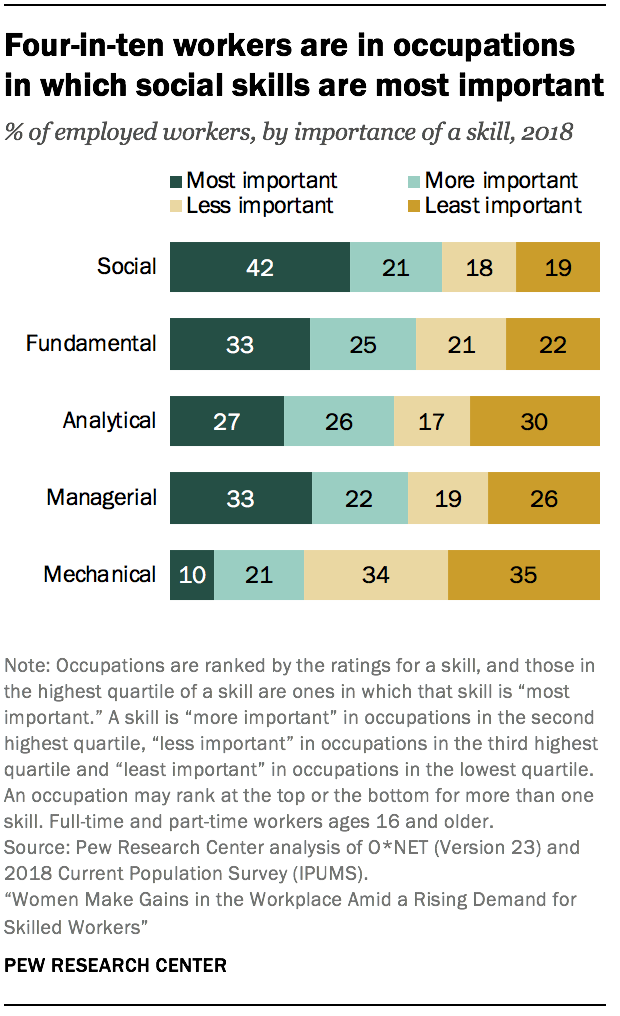 The U.S. economy employed nearly 156 million workers in 2018 in the midst of a record long spell of job creation. The jobs these workers did are different from what workers had done a few decades ago. Opportunities in the manufacturing sector have diminished, shrunken by a rising tide of automation and globalization. Meanwhile, the growing demand for a college education and the emergence of Millennials have fueled growth in the education sector. And the aging Baby Boomers have created an appetite for more health care workers.

On the other hand, men are much more likely than women to work in jobs requiring mechanical skills. In 2018, 47% of men were employed in occupations in which these skills are either most or more important, compared with only 14% of women. Conversely, women were twice as likely as men – 48% vs. 24% – to be found in jobs in which mechanical skills are least important.

Women also have an edge over men with respect to fundamental skills. About two-thirds of women (64%) were in jobs in which fundamental skills are either most or more important, compared with 52% of men. The gender gap in analytical skills is narrow, with women and men almost equally spread across jobs ranked by the importance of analytical skills.

There is virtually no difference in how women and men are represented in occupations grouped by the importance of managerial skills.

Occupations often need higher proficiency in more than one skill

A key aspect of workplace skills is that jobs often place a high degree of emphasis on more than one skill. In general, social, fundamental, analytical and managerial skills operate in harmony, a higher need for one skill accompanied by a higher need for the other skills. However, mechanical skills are weakly, and negatively, related with the other skills. Thus, there is considerable overlap in the counts of workers in jobs in which social, fundamental, analytical and managerial skills are more (or less) important, but there is little overlap among jobs in which mechanical skills and other skills are more important.

The relationship among skills is illustrated by the appearance of some occupations at the top of the ratings of more than one skill. For example, education administrators are called upon to be highly adept in social, fundamental and managerial skills. The 10 occupations that appear at the top of the importance ratings for each skill in 2018 are as follows:

The skills that women and men deploy in the workplace are influenced by the specific occupations they gravitate to, whether by choice or by dint of cultural norms and other constraints.

The occupations in which women are more concentrated are often represented at the top of the ratings of social, fundamental and managerial skills. They fall into the broad categories of administrative support, health care, sales and related, managerial, and education related occupations. Collectively, these five major groups of occupations accounted for 61% of women’s employment in 2018. Examples of these types of jobs include supervisors of administrative support workers, psychiatrists, supervisors of sales workers, medical and health services managers, and education administrators (see text box).

In contrast, men are more concentrated in jobs with a stronger need for mechanical skills. Specifically, production, installation and repair occupations, construction, extraction and farming, and transportation and related occupations are among the top five occupations for men, accounting for 34% of their employment in 2018. Examples of jobs within these broad groups include signal and track switch repairers, elevator installers and repairs, and industrial machinery mechanics.

Women have done more than men to capitalize on the increased demand for social, fundamental and analytical skills.15 The employment of women in jobs in which social skills are most important increased 174% from 1980 to 2018, compared with 70% for men. An even greater gender divide appeared during this time in hiring into jobs in which fundamental skills are most important – 193% to 54% in favor of women. Women’s gains in employment (197%) also outdistanced men’s (53%) in occupations relying most on analytical skills. Overall, women’s employment increased by 74% from 1980 to 2018, compared with 45% for men.

The rapidly growing presence of women in higher-skill nonmechanical activities is partly a result of their transition into new lines of work since 1980. Most notably, women’s share in employment in community and legal services occupations increased from 35% in 1980 to 60% in 2018. Women also moved into the majority in business operations and financial specialist occupations, with their share in employment increasing from 36% to 54% over the period. Other notable changes include the rising presence of women in managerial as well as scientific and technical occupations, with their shares in these two job categories increasing by 15 and 10 percentage points, respectively. 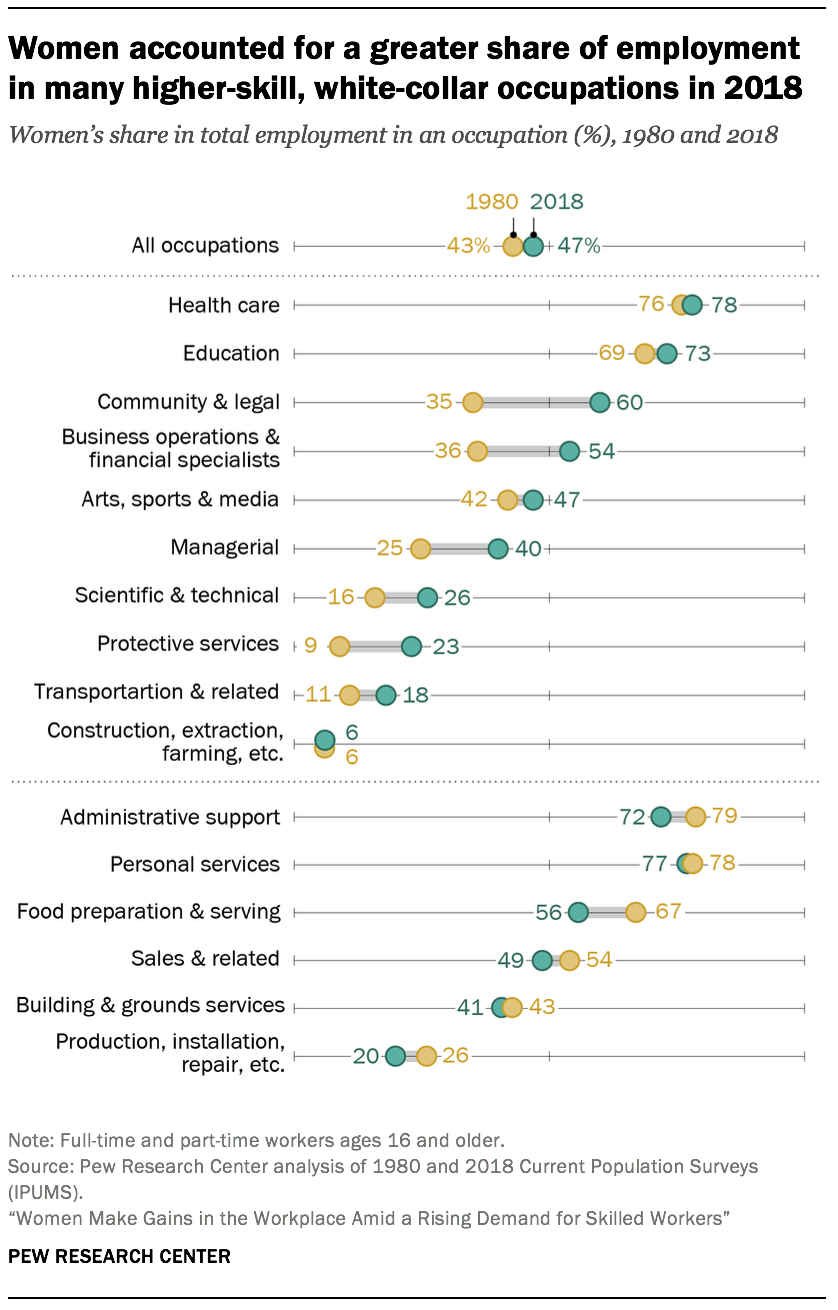 On the other side of the ledger, women pivoted away from food preparation and serving, administrative support, and installation, maintenance and repair occupations from 1980 to 2018. The most significant change was the exit from food preparation and serving occupations, with women’s share in employment in these jobs decreasing from 67% to 56% over the period. Meanwhile, women’s share in employment in administrative support occupations fell from 79% to 72%, and their share in installation, maintenance and repair occupations decreased from 26% to 20%.

The occupational gender gap notwithstanding, the profile of women in high-skill jobs has come into sharper relief since 1980. As noted, women’s share of employment in jobs in which social, fundamental and analytical skills are most important increased rapidly from 1980 to 2018. Meanwhile, women’s role in occupations placing the least importance on social skills has diminished markedly, from 34% in 198o to 25% in 2018. Their presence in occupations least in need of fundamental, analytical, managerial or mechanical skills is largely unchanged.

Occupations ranked at the top of the social skills ladder employed nearly 34 million women and 32 million men in 2018. In terms of employment, the leading high-social-skills job for women was nursing, with 3 million women working as registered nurses in 2018. Employment as elementary and middle school teachers was nearly as important for women in the group of occupations requiring high social skills, followed by supervising sales workers, managing in assorted jobs and providing customer service. Notably, vast majorities of registered nurses (88%) and elementary and middle school teachers (80%) are women.

For men, a variety of managerial jobs provided the top high-social-skills opportunities, engaging more than 3 million men in 2018. Perhaps not surprisingly, most such managers (64%) are men. Retail sector jobs were also significant as a leading social skills activity, with more than 4 million men managing sales workers or working as retail salespersons.

Across other nonmechanical skills, nursing also emerges as a key occupation for women serving in top-rung fundamental, analytical and managerial skills jobs. So too are miscellaneous managerial jobs, even though women account for only about one-third of employment in these jobs. Retail jobs in supervisory capacities and accounting are other key high-skill occupations for women.

Men in jobs calling for prowess in fundamental, analytical and managerial skills are principally employed as managers, from serving as chief executives to construction managers to an assortment of other managerial jobs. Most construction managers (92%) and chief executives (73%) are male. So too are computer research and software developers, other major sources of high-skill work for men. 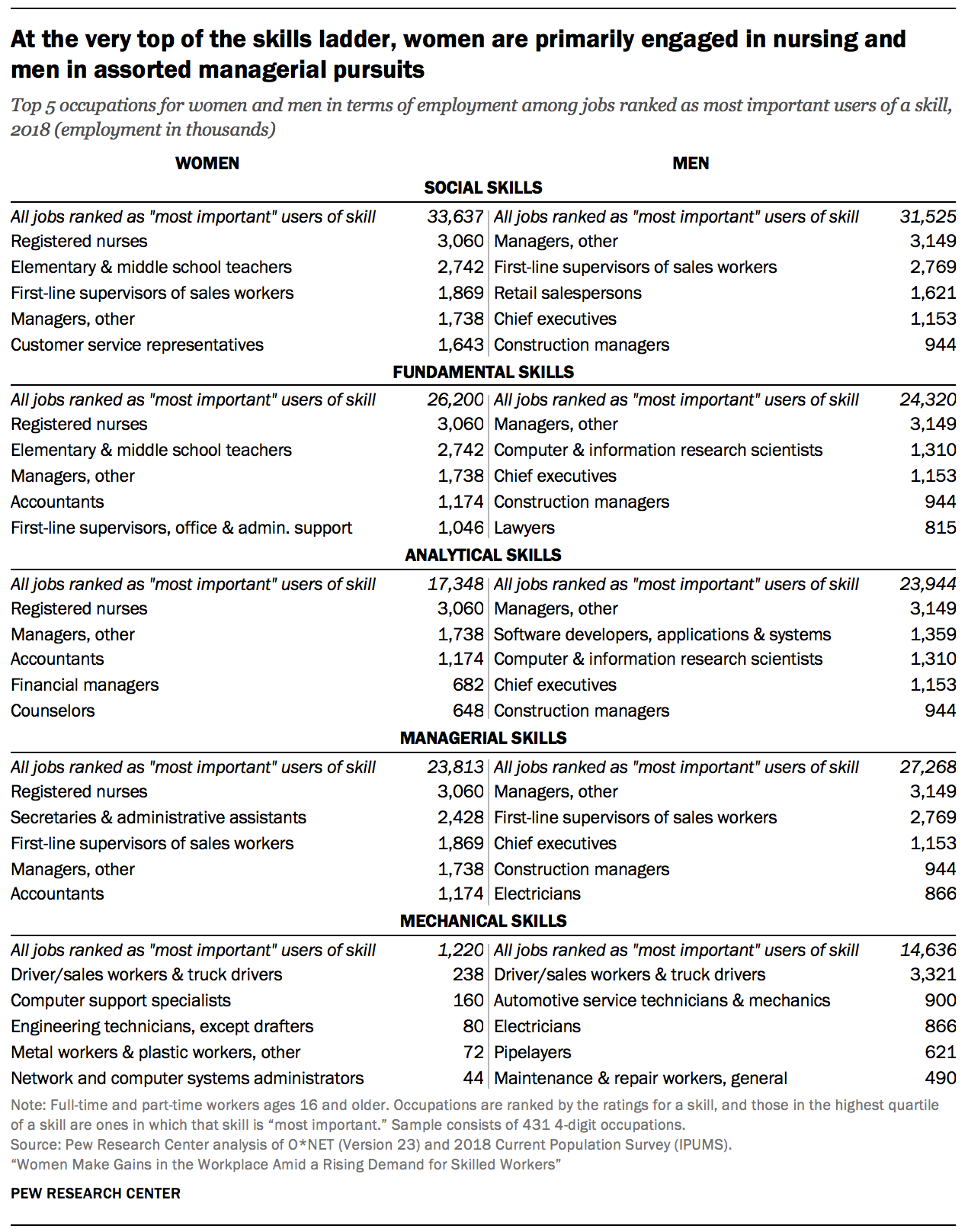 The O*NET database, which is the source of ratings for occupational skills, does not contain employment information for occupations. In this analysis, the employment estimates are obtained from the Current Population Survey, or CPS (IPUMS versions). Although both O*NET and the CPS use the same occupational classification, there is one key difference: O*NET lists more than 950 occupations coded at the eight-digit level, the finest detail possible, whereas the CPS lists fewer than 500 occupations coded at the four-digit level. Thus, occupational data in O*NET must be aggregated to match up to the CPS data. This process, described in detail in Methodology, culminated in a dataset for 2018 containing skills ratings and estimates of the employment of women and men in 431 occupations. Total employment in these 431 occupations is estimated to be 155.3 million, just shy of the official government estimate of total U.S. employment of 155.8 million for 2018.

Next: 2. Women’s lead in skills and education is helping narrow the gender wage gap Next Page → ← Prev Page