The American Trends Panel (ATP), created by Pew Research Center, is a nationally representative panel of randomly selected U.S. adults. Panelists participate via self-administered web surveys. Panelists who do not have internet access at home are provided with a tablet and wireless internet connection. Interviews are conducted in both English and Spanish. The panel is being managed by Ipsos. 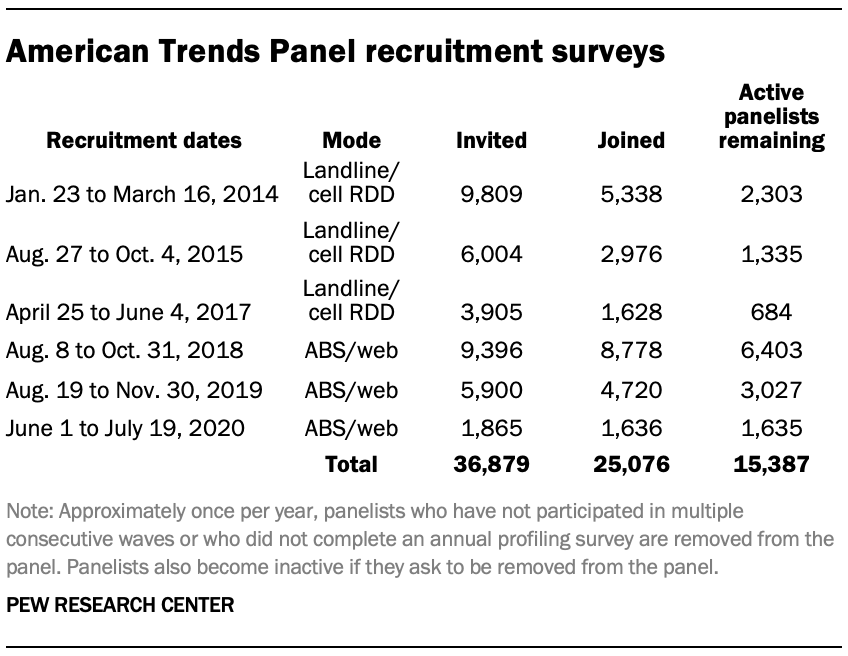 Data in this report is drawn from the panel wave conducted Aug. 3 to Aug. 16, 2020. A total of 13,200 panelists responded out of 15,387 who were sampled, for a response rate of 86%. This does not include four panelists who were removed from the data due to extremely high rates of refusal or straightlining. The cumulative response rate accounting for nonresponse to the recruitment surveys and attrition is 5%. The break-off rate among panelists who logged on to the survey and completed at least one item is 1%. The margin of sampling error for the full sample of 13,200 respondents is plus or minus 1.4 percentage points.

The U.S. Postal Service’s Delivery Sequence File has been estimated to cover as much as 98% of the population, although some studies suggest that the coverage could be in the low 90% range.5 The American Trends Panel never uses breakout routers or chains that direct respondents to additional surveys. 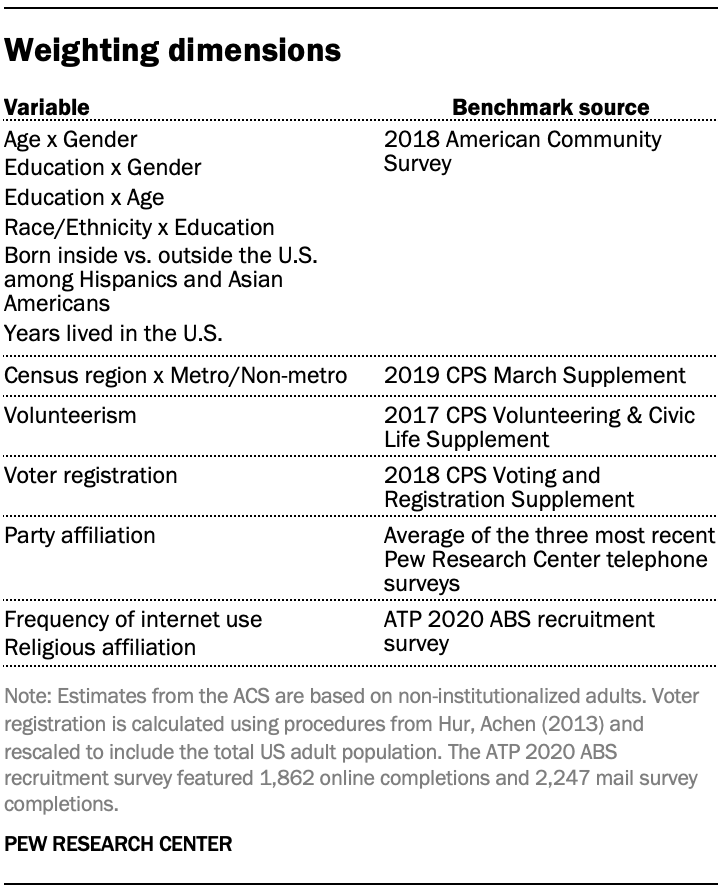 The ATP data was weighted in a multistep process that accounts for multiple stages of sampling and nonresponse that occur at different points in the survey process. First, each panelist begins with a base weight that reflects their probability of selection for their initial recruitment survey (and the probability of being invited to participate in the panel in cases where only a subsample of respondents were invited). The base weights for panelists recruited in different years are scaled to be proportionate to the effective sample size for all active panelists in their cohort. To correct for nonresponse to the initial recruitment surveys and gradual panel attrition, the base weights for all active panelists are calibrated to align with the population benchmarks identified in the accompanying table to create a full-panel weight.

For ATP waves in which only a subsample of panelists are invited to participate, a wave-specific base weight is created by adjusting the full-panel weights for subsampled panelists to account for any differential probabilities of selection for the particular panel wave. For waves in which all active panelists are invited to participate, the wave-specific base weight is identical to the full-panel weight.

In the final weighting step, the wave-specific base weights for panelists who completed the survey are again calibrated to match the population benchmarks specified above. These weights are trimmed (typically at about the 1st and 99th percentiles) to reduce the loss in precision stemming from variance in the weights. Sampling errors and test of statistical significance take into account the effect of weighting.

Sample sizes and sampling errors for other subgroups are available upon request. In addition to sampling error, one should bear in mind that question wording and practical difficulties in conducting surveys can introduce error or bias into the findings of opinion polls.

The metropolitan area cost-of-living adjustment is based on price indexes published by the U.S. Bureau of Economic Analysis. These indexes, known as Regional Price Parities (RPP), compare the prices of goods and services across 384 metropolitan statistical areas as well as non-metro areas with the national average prices for the same goods and services. The most recent available data is from 2018.

The national estimates presented in the analysis encompass the U.S. adult population. Those who fall outside of the 378 metropolitan statistical areas found in Wave 72 of the ATP are assigned the RPP for their state’s non-metropolitan area.

Family incomes are then adjusted for the number of people in a household using the methodology from Pew Research Center’s previous work on the American middle class. That is done because a four-person household with an income of say, $50,000, faces a tighter budget constraint than a two-person household with the same income.

“Middle-income” adults are in families with annual incomes that are two-thirds to double the median family income in this ATP sample after incomes have been adjusted for household size and the local cost of living. The median family income for this sample is roughly $59,700 for an average family of three. Using this median income, the middle-income range is about $39,800 to $119,400 annually for a three-person family. Lower-income families have incomes less than roughly $39,800 and upper-income families have incomes greater than roughly $119,400 (all figures expressed in 2019 dollars).

Based on these adjustments, among respondents who provided their income and household size, 31% are lower income, 45% are middle income and 18% fall into the upper-income tier. An additional 6% either didn’t offer a response to the income question or the household size question.

A note about the Asian sample

CORRECTION (October 2020): The methodology section has been updated to reflect the correct cumulative response rate. None of the study findings or conclusions were affected.