One-in-ten eligible voters in the 2020 electorate will be part of a new generation of Americans – Generation Z. Born after 1996, most members of this generation are not yet old enough to vote, but as the oldest among them turn 23 this year, roughly 24 million will have the opportunity to cast a ballot in November. And their political clout will continue to grow steadily in the coming years, as more and more of them reach voting age.

Unlike the Millennials – who came of age during the Great Recession – this new generation was in line to inherit a strong economy with record-low unemployment. That has all changed now, as COVID-19 has reshaped the country’s social, political and economic landscape. Instead of looking ahead to a world of opportunities, Gen Z now peers into an uncertain future.

There are already signs that the oldest Gen Zers have been particularly hard hit in the early weeks and months of the coronavirus crisis. In a March 2020 Pew Research Center survey, half of the oldest Gen Zers (ages 18 to 23) reported that they or someone in their household had lost a job or taken a cut in pay because of the outbreak. This was significantly higher than the shares of Millennials (40%), Gen Xers (36%) and Baby Boomers (25%) who said the same. In addition, an analysis of jobs data showed that young workers were particularly vulnerable to job loss before the coronavirus outbreak, as they were overrepresented in high-risk service sector industries.

Aside from the unique set of circumstances in which Gen Z is approaching adulthood, what do we know about this new generation? We know it’s different from previous generations in some important ways, but similar in many ways to the Millennial generation that came before it. Members of Gen Z are more racially and ethnically diverse than any previous generation, and they are on track to be the most well-educated generation yet. They are also digital natives who have little or no memory of the world as it existed before smartphones.

Still, when it comes to their views on key social and policy issues, they look very much like Millennials. Pew Research Center surveys conducted in the fall of 2018 (more than a year before the coronavirus outbreak) among Americans ages 13 and older found that, similar to Millennials, Gen Zers are progressive and pro-government, most see the country’s growing racial and ethnic diversity as a good thing, and they’re less likely than older generations to see the United States as superior to other nations.1

A look at how Gen Z voters view the Trump presidency provides further insight into their political beliefs. A Pew Research Center survey conducted in January of this year found that about a quarter of registered voters ages 18 to 23 (22%) approved of how Donald Trump is handling his job as president, while about three-quarters disapproved (77%). Millennial voters were only slightly more likely to approve of Trump (32%) while 42% of Gen X voters, 48% of Baby Boomers and 57% of those in the Silent Generation approved of the job he’s doing as president.

Generation Z represents the leading edge of the country’s changing racial and ethnic makeup. A bare majority (52%) are non-Hispanic white – significantly smaller than the share of Millennials who were non-Hispanic white in 2002 (61%). One-in-four Gen Zers are Hispanic, 14% are black, 6% are Asian and 5% are some other race or two or more races. 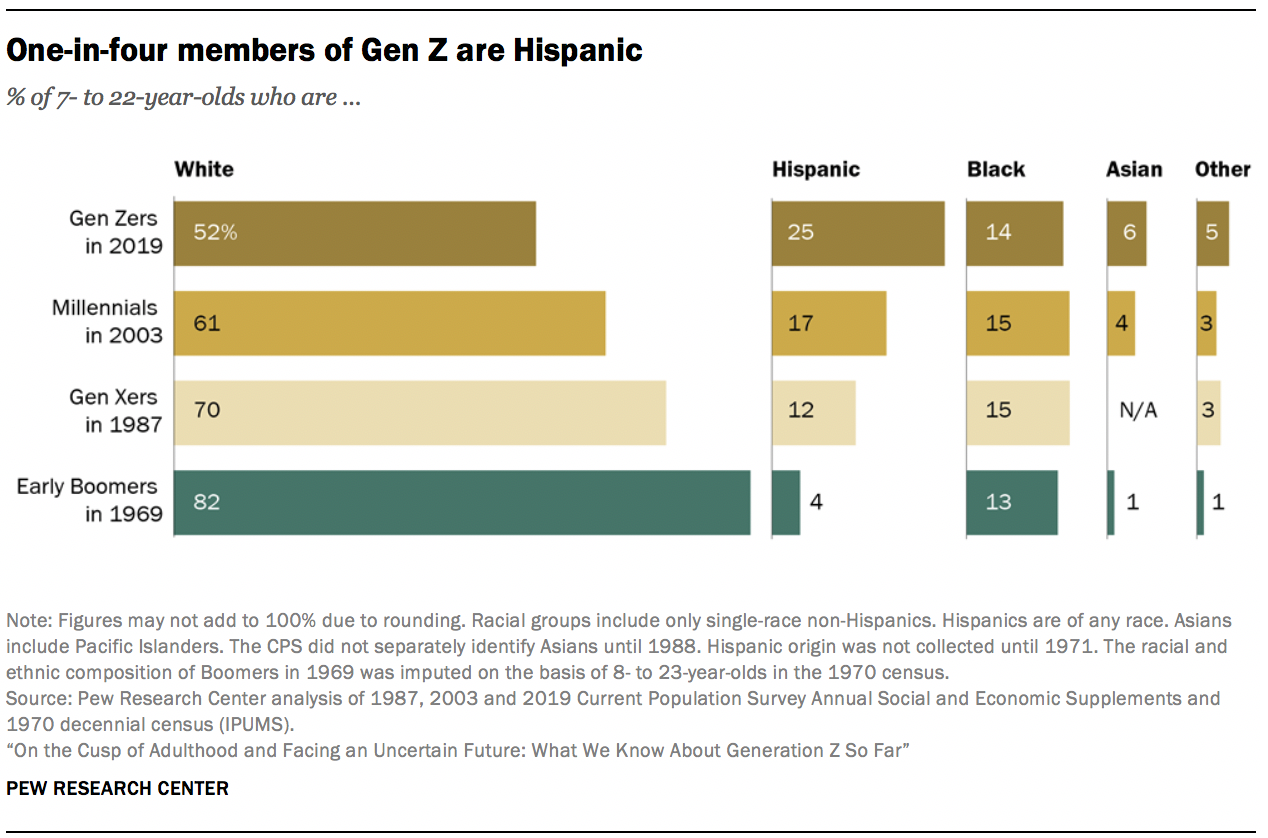 Gen Zers are slightly less likely than Millennials to be immigrants: 6% were born outside of the U.S., compared with 7% of Millennials at the same age. But they are more likely to be the children of immigrants: 22% of Gen Zers have at least one immigrant parent (compared with 14% of Millennials). Even as immigration flows into the U.S. have diminished in recent years, new immigrants will join the ranks of Gen Z in the years to come. As a result, this generation is projected to become majority nonwhite by 2026, according to Census Bureau projections.

Gen Z on track to be the best-educated generation yet

A look at older members of Generation Z suggests they are on a somewhat different educational trajectory than the generations that came before them. They are less likely to drop out of high school and more likely to be enrolled in college. Among 18- to 21-year-olds no longer in high school in 2018, 57% were enrolled in a two-year or four-year college. This compares with 52% among Millennials in 2003 and 43% among members of Gen X in 1987. 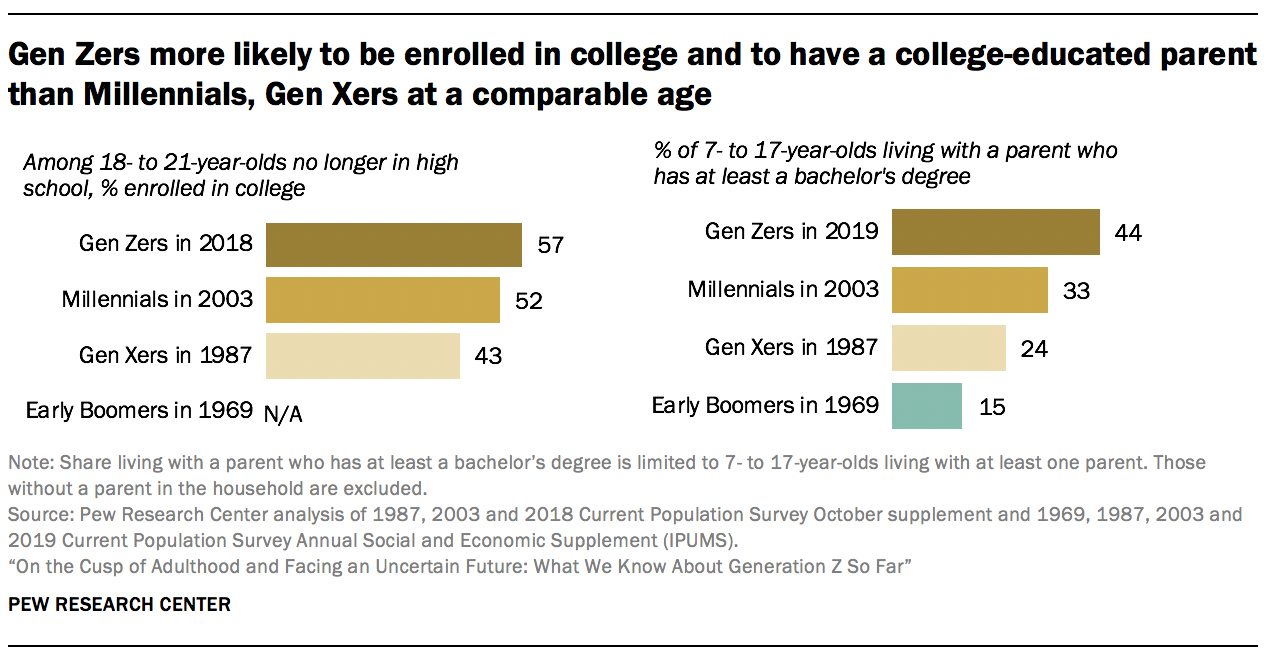 Gen Zers are also more likely to have a college-educated parent than are previous generations of young people. In 2019, 44% of Gen Zers ages 7 to 17 were living with a parent who had a bachelor’s degree or more education, compared with 33% of Millennials when they were the same age. Both of these trends reflect the overall trend toward more Americans pursuing higher education.

Perhaps because they are more likely to be engaged in educational endeavors, Gen Zers are less likely to be working than previous generations when they were teens and young adults. Only 18% of Gen Z teens (ages 15 to 17) were employed in 2018, compared with 27% of Millennial teens in 2002 and 41% of Gen Xers in 1986. And among young adults ages 18 to 22, while 62% of Gen Zers were employed in 2018, higher shares of Millennials (71%) and Gen Xers (79%) were working when they were a comparable age. 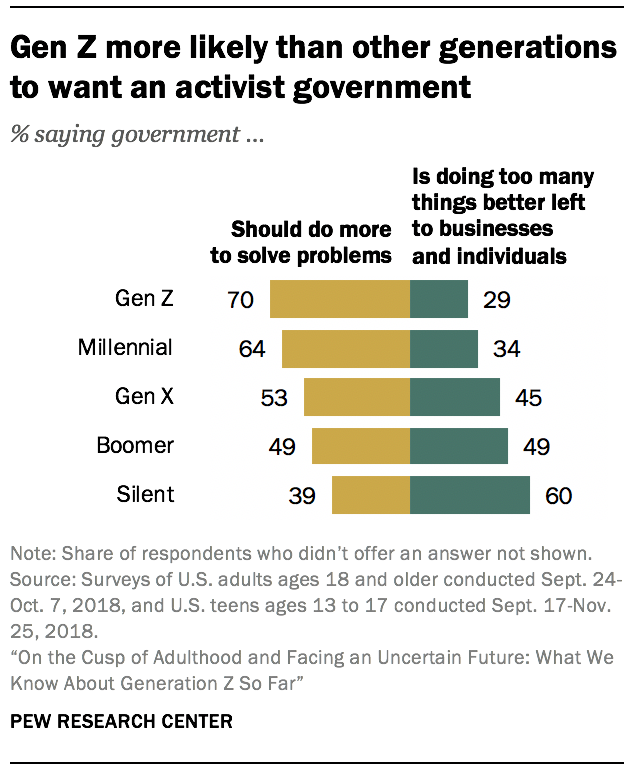 The views of Gen Z mirror those of Millennials in many ways. Still, survey data collected in 2018 (well before the coronavirus outbreak) shows that there are places where this younger generation stands out as having a somewhat different outlook. 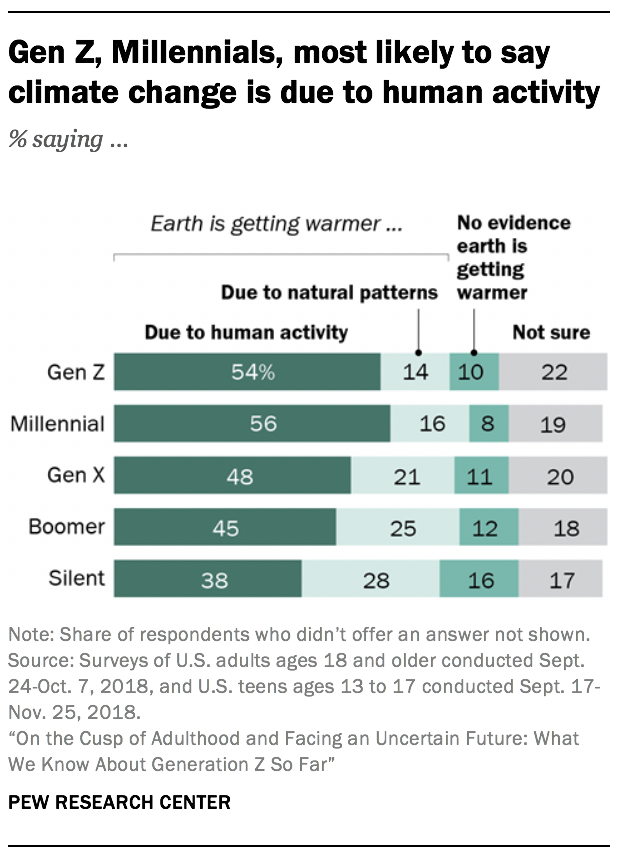 For the most part, however, Gen Zers and Millennials share similar views on issues facing the country. These younger generations are more likely than their older counterparts to say the earth is getting warmer due to human activity: 54% of Gen Z and 56% of Millennials say this, compared with smaller shares of Gen Xers, Boomers and Silents (48%, 45% and 38%, respectively).

Within the GOP, Gen Zers have sharp differences with their elders 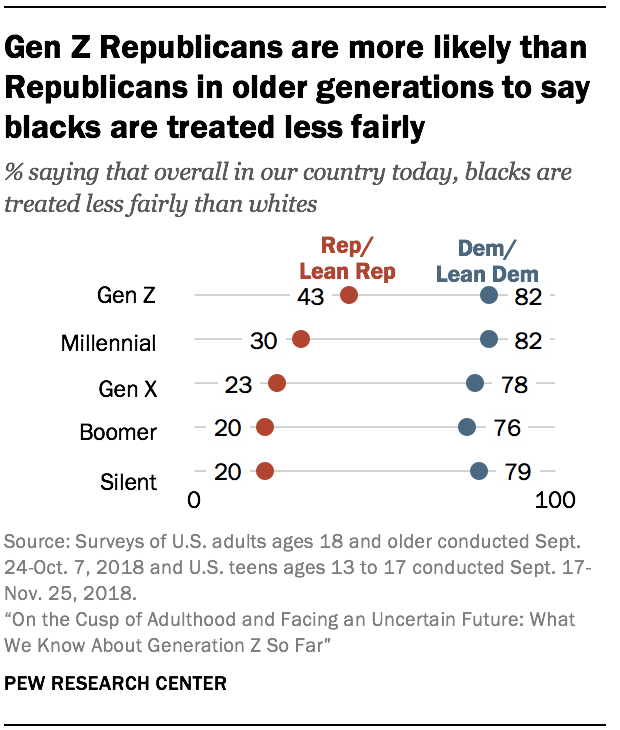 Overall, members of Gen Z look similar to Millennials in their political preferences, particularly when it comes to the upcoming 2020 election. Among registered voters, a January Pew Research Center survey found that 61% of Gen Z voters (ages 18 to 23) said they were definitely or probably going to vote for the Democratic candidate for president in the 2020 election, while about a quarter (22%) said they were planning to vote for Trump. Millennial voters, similarly, were much more likely to say they plan to support a Democrat in November than Trump (58% vs. 25%). Larger shares of Gen X voters (37%), Boomers (44%) and Silents (53%) said they plan to support President Trump. 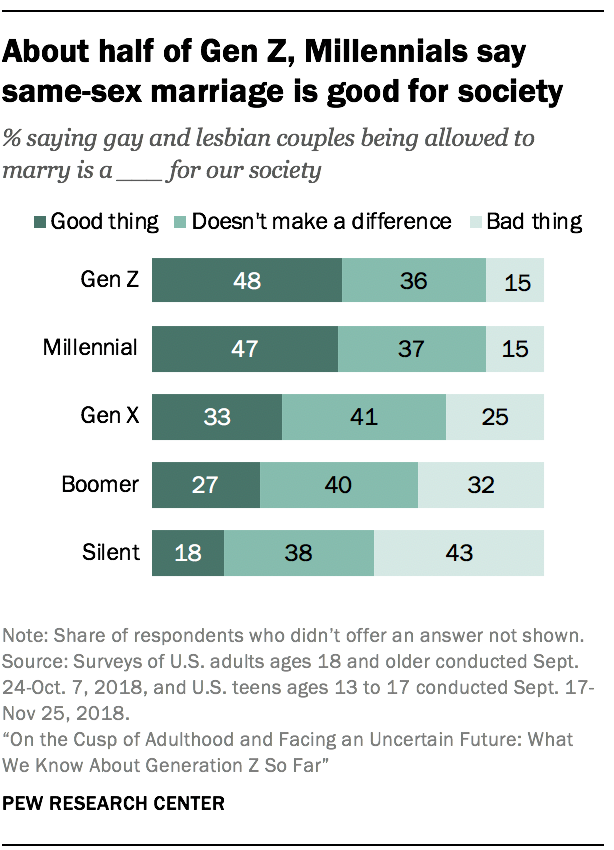 Across a number of measures, Gen Zers and Millennials stand out from older generations in their views of family and societal change. Roughly half of Gen Zers (48%) and Millennials (47%) say gay and lesbian couples being allowed to marry is a good thing for our society. By comparison, only one-third of Gen Xers and about one-quarter of Boomers (27%) say this is a good thing. Pluralities of Boomers and Gen Xers say it doesn’t make a difference. Members of the Silent Generation are the most likely to view this as a bad thing for society.

There is a similar pattern in views of people of different races marrying each other, with larger shares of Millennials and Gen Zers saying this is a good thing for our society, compared with older generations. Very few across generations say this is a bad thing for society.

When it comes to their own home life, the experiences of Gen Z reflect, in part, broad trends that have reshaped the American family in recent decades. According to a Pew Research Center analysis of Census Bureau data, about three-in-ten (29%) live in a household with an unmarried parent while 66% live with two married parents. A roughly comparable share of Millennials (69%) lived with two married parents at a similar age, but the shares among Gen Xers and Boomers were significantly larger (72% and 86%). Of those Gen Zers who are living with two married parents, in most cases both of those parents are in the labor force (64%). This compares with a slightly higher share of Millennials who were living with two parents at a comparable age (66% had two parents in the labor force) and a slightly lower share of Gen Xers (61%).

Ideas about gender identity are rapidly changing in the U.S., and Gen Z is at the front end of those changes. Gen Zers are much more likely than those in older generations to say they personally know someone who prefers to go by gender-neutral pronouns, with 35% saying so, compared with 25% of Millennials, 16% of Gen Xers, 12% of Boomers and just 7% of Silents. This generational pattern is evident among both Democrats and Republicans.

There are also stark generational differences in views of how gender options are presented on official documents. Gen Z is by far the most likely to say that when a form or online profile asks about a person’s gender it should include options other than “man” and “woman.” About six-in-ten Gen Zers (59%) say forms or online profiles should include additional gender options, compared with half of Millennials, about four-in-ten Gen Xers and Boomers (40% and 37%, respectively) and roughly a third of those in the Silent Generation (32%). 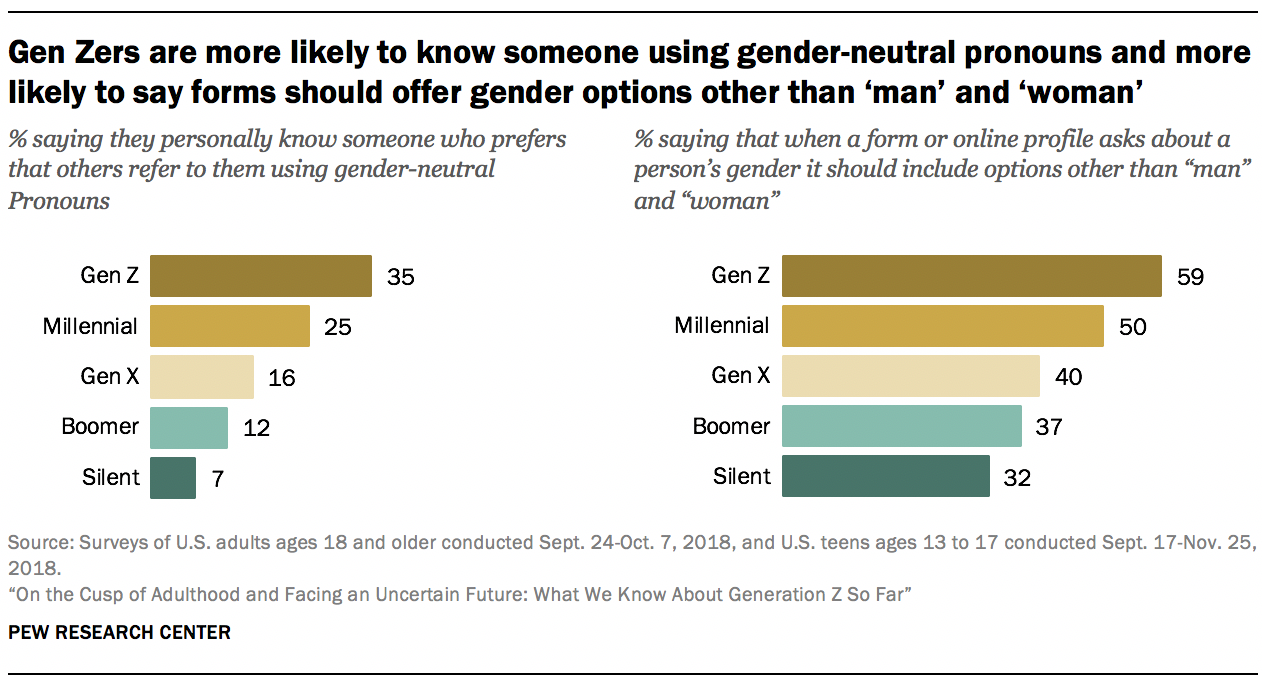 These views vary widely along partisan lines, and there are generational differences within each party coalition. But those differences are sharpest among Republicans: About four-in-ten Republican Gen Zers (41%) think forms should include additional gender options, compared with 27% of Republican Millennials, 17% of Gen Xers and Boomers and 16% of Silents. Among Democrats, half or more in all generations say this.

Gen Zers are similar to Millennials in their comfort with using gender-neutral pronouns. Both groups express somewhat higher levels of comfort than other generations, though generational differences on this question are fairly modest. Majorities of Gen Zers and Millennials say they would feel “very” or “somewhat” comfortable using a gender-neutral pronoun to refer to someone if asked to do so. By comparison, Gen Xers and Boomers are about evenly divided: About as many say they would feel at least somewhat comfortable (49% and 50%, respectively) as say they would be uncomfortable.

Members of Gen Z are also similar to Millennials in their views on society’s acceptance of those who do not identify as a man or a woman. Roughly half of Gen Zers (50%) and Millennials (47%) think that society is not accepting enough of these individuals. Smaller shares of Gen Xers (39%), Boomers (36%) and those in the Silent Generation (32%) say the same.

Looking at the relationship American teens have with technology provides a window into the experiences of a significant segment of Generation Z. According to a 2018 Pew Research Center survey, 95% of 13- to 17-year-olds have access to a smartphone, and a similar share (97%) use at least one of seven major online platforms.

YouTube, Instagram and Snapchat are among teens’ favorite online destinations. Some 85% say they use YouTube, 72% use Instagram and 69% use Snapchat. Facebook is less popular with teens – 51% say they use this social media site. Some 45% of teens say they are online “almost constantly,” and an additional 44% say they’re online several times a day.

Some researchers have suggested that the growing amount of time teens are spending on their mobile devices, and specifically on social media, is contributing to the growth in anxiety and depression among this group. Teens have mixed views on whether social media has had a positive or negative effect on their generation. About three-in-ten (31%) say the effect on people their own age has been mostly positive, 24% say it’s been mostly negative, and 45% say it’s been neither positive nor negative.